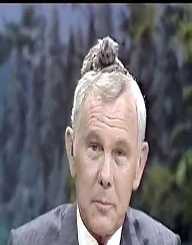 Born John William Carson on October 23, 1925, in Corning, Iowa, United States of America, Johnny Carson became the most recognized and respected face of American television mostly due to his splendid anchoring of “The Tonight Show”, which he hosted for 3 decades. His father Homer Lloyd Carson was a power company manager and his mother Ruth Elizabeth Carson was a homemaker who hailed from an Irish ancestry.

After getting raised in the smaller nearby towns of Avoca, Clarinda, and Red Oak in southwest Iowa, William Carson moved to Norfolk, Nebraska at the age of eight. His passion towards the world of entertainment started taking shape after he came to Norfolk. At age 12, he ordered a magician’s kit by post and procured the same after having read a book on magic at a friend’s house. Starting with the card tricks Carson began to show his entertainment skills and started practicing his magician’s skill in front of his family members. Upon perfecting the required skill, he assumed the name of ‘The Great Carsoni’ and started showing his skill publicly. He presented his first such show in front of the members of the local Kiwanis Club. He made his professional debut as a magician at the age of 14 and earned $3 dollar per show. He continued to present his performance at local picnics and county fairs.

After his high school graduation, William Carson joined the United States Navy. He was commissioned as an ensign upon completion of his training curriculum titled V-12 Navy College Training Program officer training at the Columbia University and the Millsap’s College.  As a communications officer, he was entrusted to decode the encrypted messages while serving on board the USS Pennsylvania in the Pacific Ocean. He continued to enthrall his fellow shipmates with his magic tricks and was immensely satisfied after performing his tricks in front of United States Secretary of the Navy James V. Forrestal. The World War II ended in 1945 after the bombing of Hiroshima and Nagasaki and Carson was sent back to the United States though originally he was scheduled to participate in the ongoing battle.

William Carson received a bachelor's degree in radio and speech from University of Nebraska having pursued the course for four years after his return from the U.S. Navy. He worked as a television writer for The Red Skelton Show in Los Angeles after his college for a short duration and moved to New York City in search of a bigger assignment. Carson launched his broadcasting career in 1950 with WOW radio and television in Omaha, Nebraska. Shortly afterward, he received an opportunity to host a morning television program titled ‘The Squirrel's Nest’.

Carson eventually joined the Los Angeles based television station KNXT after managing a recommendation of one of the wives of the Omaha political figures. He joined the low budget sketch comedy show, Carson's Cellar being broadcast on KNXT, which was owned by CBS, as a writer. He was required to replace the main comedian of the Richard “Red” Skelton after the latter accidentally knocked himself senseless just an hour before the live show was to be broadcast. William Carson more than compensated for the absence of Red Skelton and successfully filled the void created by the latter’s indisposition.

From 1955 to 1962, he was associated with many television programs including the likes of ‘Earn Your Vacation’ (1954), a game show and ‘The Johnny Carson Show’ (1955–1956), a variety entertainment show by CBS. The Johnny Carson Show failed after a two-year broadcast and Carson began hosting a New York City-based show called ‘Who Do You Trust?’ (1957–1962). The program was a daytime live show and Carson was reluctant to appear on daytime shows with a belief that his career will be spoiled if he chooses to appear on daytime shows. However, belying all his apprehensions, the program turned out to be a resounding success and was termed as "the hottest item on daytime television" during its broadcast over half a decade. Ed McMahon, one of Carson’s future sidekick and Straight man was also introduced to him during his tenure on the ABC program. In those days, NBC was broadcasting a late night talk show called ‘The Tonight Show’ since 1953 with Steve Allen as the program’s original host.

In 1956, Jack Paar replaced Allen as the latter left the program to concentrate on his other primetime comedy-variety shows. In 1962, Jack Paar also left the program and William Carson started his golden stint of the next three decades as the host of ‘The Tonight Show’. He was highly successful in replacing the former host of the show. His warm and pleasant persona, sharp-witted presence of mind and his crisp comments during the daily interviewing of the celebrities spanning an uncomfortably long 105 minutes of time coupled with his calm demeanour and steady style of presentation while conducting the interviews won over the hearts of the audiences catapulting him to a position of the most popular and celebrated natural host of television shows of that era.

Besides receiving six Emmy Awards for his outstanding presentation of ‘The Tonight Show’ for three decades, William Carson also won the Television Academy's 1980 Governor's Award, 1985 Peabody Award and was conferred the Presidential Medal of Freedom (1992) and a Kennedy Center Honor (1993). He was honored by the Television Academy Hall of Fame in 1987 after his name is inducted into it. His final appearance on ‘The Tonight Show’ as a host in 1992 was viewed by over 50 million viewers all over the world.

William Carson married a total of four times during his 74-year long life. His first marriage was solemnized in 1948 when he married Jody Wolcott. The volatile marriage ended in divorce in 1963 after allegations of infidelities multiple times from both sides. The couple together has three sons.

On August 17, 1963, William Carson married Joanne Copeland who became his second wife. They eventually divorced in 1972 after a protracted legal battle, which saw Carson shelling out $6000 as monthly alimony to Copeland. The couple remained issueless during their conjugal life. On September 30, 1972, Carson tied the nuptial knot for the third time having secretly married former model Joanna Holland that afternoon. The couple eventually divorced in 1985. From 1985 to 1987, Carson remained single for the first time after his first marriage. On June 20, 1987, he married Alexis Mass, which happened to be his fourth marriage. They remained unseparated till Carson’s eventual demise in 1999.

On January 23, 2005, Carson breathed his last after having suffered a severe heart attack on March 19, 1999. His death was due to respiratory failure triggered by a disease called emphysema.

William Carson is revered as a television legacy all over the world.