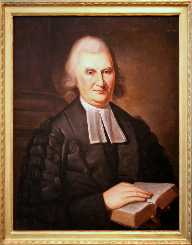 Clergyman, author, and educator John Witherspoon was born on the 5 February 1722 in Aberdeenshire, Scotland to Reverend James Alexander Witherspoon and Anne Walker.

Witherspoon was educated at Haddington Scotland after which, with the intention of becoming a minister, he did a Master of Arts at the University of Edinburgh. He obtained a Doctorate of Divinity a the University of St Andrews.

After completing his studies, John Witherspoon served as a Presbyterian minister at a parish in Beith (1745-1757) and also at a parish in Paisley(1757-1768). During this time he wrote three books on theology. Because of his sound education and writings, Witherspoon was then offered the position of President of the College of New Jersey (later renamed Princeton University) in 1767.

Witherspoon, his wife Anna Walker and their five children arrived in America in 1768. He took over 300 volumes on the voyage, intended for the college library.

During his tenure at the College of New Jersey, John Witherspoon increased the student population, and he also developed the curriculum adding courses in Civil Government, International Law, and French. Part of his focus was to train religious leaders, and the college became involved in the issue of religious freedom in America. He was also involved in establishing the American Presbyterian Church’s General Assembly (1789).

Witherspoon was an influential, politically active presence during America’s founding period. He was a member of the New Jersey State Legislature (1783-1789), the only clergyman and college president to sign the Declaration of Independence and a delegate to the Continental Congress (1776-1782). During 1777, the College of New Jersey was evacuated when the British Army closed in. After the British occupation, the college was left badly damaged, and Witherspoon was involved in the rebuilding. He was also involved in raising funds and redeveloping the college, and George Washington donated 50 gold guineas after a request from Witherspoon.

Witherspoon retained his position as President of the College of New Jersey until he died in 1794.

The University of Edinburgh placed a plaque honouring Witherspoon at the main entrance of the north facade of New College in 2000.

After suffering various injuries, John Witherspoon had problems with his eyes and was blind for the last two years of his life.