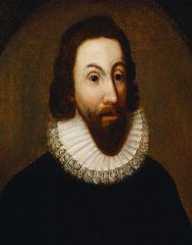 Puritan and founding governor of the Massachusetts Bay Colony in New England, John Winthrop was born on the 12 January 1587. He was the scion of a prosperous family in Edwardstone, Suffolk, England and his parents were Anne Browne and Adam Winthrop.

Private tutors homeschooled him before John Winthrop enrolled at Trinity College, Oxford. Later, he also did study law, qualifying as a lawyer.

In 1613, John Winthrop became the Lord of the Manor at Gorton. When Charles I ascended the English throne in 1624 and Puritans felt Charles I,  became king in 1624 and the Puritans thought that they would be persecuted because of their religious beliefs, Winthrop was one of those who felt that leaving England for the New World would be an option to follow.

He then became involved in organising the Cambridge Agreement which catered for the immigration of Puritans to the New World and the charter for the Massachusetts Bay Company as well as governance.

Immigration to the New World

In 1960, John Winthrop was in charge of a fleet of 11 ships and 700 passengers who departed England for the Massachusetts Bay Colony. He was aboard the Arbella. Winthrop lived in Boston which was the main port of Massachusetts, and he was the governor for 12 terms.

Winthrop had a significant difference of opinion with Anne Hutchison and Roger Williams and forced them to leave the colony in 1636. The following year, he had an issue with Anne Hutchinson’s brother-in-law who was convicted of treason because he did not conform to the orthodox Puritanic view. In 1645, Winthrop was appointed the founding President of the Confederation of New England. A total of 20,000 Puritans travelled to the New World between 1620 and 1640.

John Winthrop's wife was Mary Forth whom he married on the 16 April 1605. The couple went on to have five children together. Forth died in 1615, and he married Thomasine Clopton who died in childbirth in December 1616.