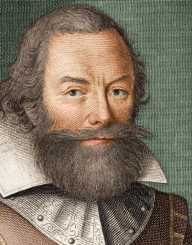 John White was born circa 1540. He was an English governor of Roanoke Island (present-day North Carolina, U.S) He also worked as an explorer, an artist, and cartographer. When White worked as a governor, he drew some sketches of the neighboring landscape as well as the Algonkin peoples.

The pieces of White's artistic work were important illustrations of a society of the Eastern seaboard. Today, the remaining fragments of his works are currently under the preservation of the British Museum print room.

John White was born circa 1540. His exact birth month is not known either is the year. However, there is an estimation of the time between 1540 and 1550. White is said to have gone to church in the parish of St. Martin Ludgate, London.

There is no concrete evidence of White's training as an artist. Although, there is the possibility that he worked as an apprentice illustrator under the guidance of the London master.

John White boldly supported the efforts to create an English colony in the New World. He became part of the first attempt when he accompanied the exploration led by Sir Ralph Lane. White, working under the instructions of Sir Walter Raleigh poised as an artist-illustrator. In 1586, he returned home after a series of difficulties marred the expedition.

While at Roanoke Island, White worked on some watercolor pieces of drawing of the surrounding landscape as well the native peoples. These pieces of art are the only surviving visual record of earlier native dwellers of America.

In 1586, White received a task from Sir Walter Raleigh to organize a new settlement in the Chesapeake Bay. The agreement would be self-sustaining and also, including women and children. White later successfully persuaded 113 colonists to be part of Raleigh's expedition. As a result, his efforts saw him named the Chief Governor of the new colony.

John White married Tomasyn Cooper. The couple had two children. A daughter, Eleanor and a son Tom. Their son died at quite a young age.

John White died circa 1593. Little is on the record about his life post his failure of the Roanoke Colony. He is solely in people's memories for his artistic watercolors. As a result, the pieces of what remained of his work are currently at the British Museum under the collection, "A New World: England's First View of America."