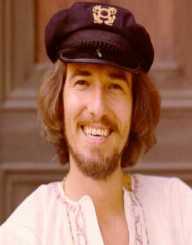 John Phillips was a talented Rock and Roll singer and songwriter, who formed part of the American musical group The Papas and The Mamas.

John Phillips was born as John Edmund Andrew Phillips on August 30, 1935, in South Carolina, USA. He was the son of Claude Andrew, a former US Marine, and Edna Gertrude. He moved to Alexandria, Virginia with his mother where he grew up.

He went to Linton Hall Military School and later George Washington Middle School. He graduated from George Washington in 1953. He enlisted into the military, only to be discharged after one year. Phillips then went back to school. He enrolled at the Hampden-Sydney College to study arts. He terminated his studies in 1959. After dropping out of college, Phillips left Virginia for New York.

Phillips showed his bias for music while still in high school. He formed a short-lived band called the Del Ray Locals. He formed a trio with Dick Weissman and Scott McKenzie called The Journeyman. Like the first one, the group disbanded after internal frictions. With the band Phillip celebrated some commercial success, producing three albums. Phillips then formed a new entity called The New Journeyman with his future wife Michelle.

In 1965 he formed yet another band The Papas and The Mamas. The group comprised of two men and two women. Phillips became the primary songwriter of the band. Other members in the band were his wife Michelle, and former Halifax duo of Dennis Doherty and Cass Elliot. They released their first song with the record company Dunhill in March 1996. The single titled California Dreamin’ made it to the top of the American music charts soon after its release. Later in the month of May, the group released another single hit Monday, Monday. The song became a hit within the American musical critics, despite its unpopularity within the band. Phillips convinced his colleagues to produce the song, which they thought was not good enough.

The group continued to enjoy high publicity with their songs. In June 1968 The Papas and The Mamas performed at the Monterey Pop Festival during a well-attended live concert. They produced another album with the name of the group as the title. In July 1968 the group broke up. Despite their fame on the musical scene, the group suffered constant infighting. The quartet involved itself with illicit sexual affairs within themselves. This culminated in the breakup of the group. Soon after the disbanding, Phillips and Michelle separated in 1968 and eventually divorced in 1970.

As the lead songwriter for the group, Phillips wrote other hit songs as I Saw Her again, 12:30, and Creeque Alley. He also wrote songs for the Grateful Dead and other musicians. Phillips recorded his maiden solo album in 1970. He withdrew from the public due to drug addiction related issues. He managed to produce songs for his third wife before moving to England.

Phillips continued in the use of hard narcotics through the years. In 1981 he was convicted for one month in jail for peddling narcotics. After his release, he embarked on an anti-narcotics campaign via television and other print media. He formed a new look The Papas and The Mamas with former member Dennis Doherty and two other newcomers. He spent the active years of his later life touring and performing with the band.

Phillips married a couple of times in his life. He first married Susan Adams in May 1957 and divorced in 1962. They had two children. In December 1962 he married Michelle Gilliam and fathered one child. He divorced her in 1970 He remarried Genevieve Waite in January 1972 and had two children. They divorced in 1985. He then married Farnaz Arasteh in February 1995. They stayed together until his death.

In his life, Phillips always courted controversy. He rebelled in school, took hard drugs, and was a habitual alcoholic. He had extramarital affairs with multiple partners.

Mackenzie Phillips, his eldest daughter from the first marriage claimed he forced her into a love affair. She broke away from the relationship after becoming pregnant and aborting the child ten years into the relationship. She also claimed Phillips introduced her into the use of hard drugs. The extended family of the Phillips denied the allegations made eight years after his demise.

Phillips suffered poor health resulting in a liver transplant. He died of a cardiac malfunction on March 18, 2001, in his home in Los Angeles. He was buried in Forest Lawn Cemetery, Los Angeles. Phillips was inducted into three Hall of Fame walls.