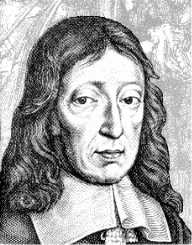 John Milton was born on 9th December 1608, to John and Sarah Milton. He was born in London, United Kingdom, in the town of Cheapside. He had one sister, Anne, and a brother, Christopher. Although there were other siblings, Anne and Christopher were the only two apart from Milton that made it past infancy.

Milton's father was known as a scrivener. He prepared wills and deeds for his clients, creating a good life for his family.s

Milton's education began at home. He had a private tutor who had graduated from the University of St. Andrews, in Scotland. In 1620, Milton started attending St. Paul’s School in London, where he studied Greek, Latin, and classical languages. He decided he wanted to be a priest for the Church of England, and five years later, he was admitted to the Christ’s College in Cambridge, with this in mind.

His study included the subjects of ethics, logic, Latin, Greek, and Hebrew. John Milton graduated in 1629 with his B.A. He continued his studies, and in 1632 he graduated from Cambridge University with his M.A.

Whilst still studying, Milton began his writing, with his first compositions dating back to when he was 15 years old.

When John Milton graduated with his M.A. in 1632, he returned home. His father had a new home in Hammersmith, and that was where he moved to. Milton studied by himself, at home, for the next six years. He studied theology, philosophy, history, literature, science, and politics. Due to the amount of study he did, John Milton is thought to be one of the most learned poets of England. As well as his normal studies, Milton was fluent in several languages.

Milton continued to write poetry through the years he was studying, some being commissioned by local nobility.

From May 1638, through to around August 1639, John Milton traveled to Europe. He toured France and Italy. The trip was an extensive study tour, which complemented John Milton's theory with practical experience. He met with the famous intellectuals and theorists of his time while he was in Europe, including the astronomer, Galileo. The only account of his travel is in his work, Defensio Secunda.

He returned to England in 1639 upon hearing of the civil war that had erupted. Sometime later he returned to Rome, and continued traveling through Europe, arriving back in England around August 1639.

When back in England, John Milton began writing prose, particularly speaking out against the hierarchy of the Church.

Although supplemented by his father’s investments, Milton began work as a private schoolmaster for the privileged few from wealthy families.

He published some controversial works in relation to divorce, and also penned The Tenure of Kings and Magistrates (1649) which stood up for the rights of citizens to have their rulers made accountable.

John Milton was gaining himself a reputation for his political writings and was appointed Secretary for Foreign Tongues in 1649. His main task was to right foreign correspondence in Latin for the English Republic, but they also had him write local propaganda as well.

He wrote two defenses over the next few years. The first was in 1649, called Elkonoklastes. Milton was ordered, in 1650, to write a defense on behalf of the English population, in relation to a defense published by Charles II.

John Milton's response was published in 1652, titled Defense pro-Populo Anglicano (First Defence). John Milton worked very carefully on the publication, as the English wanted to establish both diplomatic and cultural legitimacy at the time. The work earned John Milton a reputation in Europe, and the publication was reprinted several times.

John Milton's eyesight had been deteriorating over the years, and by 1654, John Milton was totally blind. It is thought either glaucoma or bilateral retinal detachment was the cause for his blindness.

Once blind, Milton had to dictate his poetry and prose so it could be written on his behalf.

In 1658, Cromwell died, causing massive upheaval in the political structure of the English Republic. During the Restoration, Milton wrote several works, including support of a non-Monarchial system, and writing against a state dominated by the church. A warrant was issued for his arrest, so Milton went into hiding.

A general pardon was eventually issued, but he was still arrested and imprisoned until some of his influential friends intervened, gaining his release.

John Milton's most well known work, by far, is Paradise Lost. He wrote the work between 1658 and 1664, whilst totally blind. After some small but very important changes, a second edition was released in 1674.

The sequel, Paradise Regained, was published in 1671. Milton supervised a second edition of the work in 1674, just before he died.

John Milton married his first wife, Mary Powell, in 1625. They had four children together, three daughters and a son before Mary died due to complications during childbirth.

Milton's second marriage was to Katherine Woodcock in 1656. She died in 1658, shortly after giving birth to a daughter, who also died.

Milton's third marriage was in 1662, to Elizabeth Mynshull. She was the daughter of a wealthy philanthropist and apothecary who lived in Manchester. Although there was a substantial age difference between the two, on all accounts, it was a happy marriage, and they were still together when Milton died.

With John Milton's first wife, Mary, she returned to her family after only a month of marriage, finding the age difference and severity of life with Milton too difficult. She didn’t return to Milton until 1645. It was due to her desertion that Milton wrote his papers arguing for the legality of divorce, which landed him in trouble with the authorities at the time.

John Milton is known as one of the greatest English authors in history. His status as one of the best poets of all time was immediately granted upon the publishing of Paradise Lost, and he is judged equal to, or better than, all English poets, and that includes Shakespeare.

His popularity changes at times, depending who is in power, and as to whether John Milton's political views agree with theirs or not, but his greatness is never in question.

John Milton's work is the subject of much scholarly study in modern times.