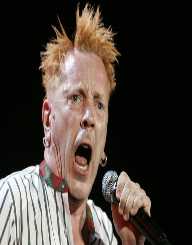 John Joseph Lydon was famous as the main singer of the revolutionary English band the Sex Pistols known for punk rock. He got the nickname John Rotten for his bad teeth. Lydon was responsible for the formation of the band in 1975 which became famous because of its furious songs like “Anarchy in the U.K” and “God Save the Queen.” Lydon started a new band, Public Image Limited or PiL, after Sex Pistols folded up in 1978.

John Lydon was born on January 31, 1956, in London in the United Kingdom. His parents were Irish, and Lydon was the eldest of the four boys. During his childhood, he was down with meningitis for a long time. He became unconscious and both his eyesight and memory were impacted.

John Lydon was brilliant, and at the same time, he was defiant. He was expelled from Sir William of York Catholic School. After that, he continued his studies in Hackney and Kingsway Princeton College.

John Lydon married Nora Forster and lives with her in Los Angeles. Nora has inherited a German publishing company.

During his school days, John Lydon came in contact with John Simon Ritchie. Richie got the nickname Sid Vicious afterwards. After leaving college, these two started living with their many friends and surveyed the numerous nightclubs and fashion stores. During these visits, Lydon was attracted by a shop, Sex.

The punk shop was the brain child of Malcolm McLaren and fashion designer Vivienne Westwood. McLaren had a devastating experience as the manager of a new rock band, New York Dolls before associating himself with the crazy shop, Sex. McLaren was intent on forming a new band after the failure of his career with New York Dolls. He met Lydon in 1975 and selected him as the main singer for his new band under formation.

The band named The Sex Pistols consisted of drummer Paul Cook, guitarist Steve Jones, and bassist Glen Matlock along with Lydon. The Sex Pistols The Sex Pistols combined passion with aggression and symbolised English punk over the next few years. Their music provoked revulsion as well as respect at the same time.

The group came out with a number of punk songs starting with “Anarchy in the U.K” in November 1975. Other songs were “God Save the Queen,” “Pretty Vacant” and “Holidays in the Sun.” Queen Elizabeth’s silver jubilee was celebrated in 1977. The same year “God Save the Queen” was released. Though the song was highly offensive, it stood second on the British charts.

The only album by The Sex Pistols, “Never Mind the Bullocks...Here’s the Sex Pistols” came out at the end of 1977. The album rose to number one position swiftly. Unfortunately, McLaren started projecting the group as rowdies which was not appreciated by Lydon. In the end, the band was destroyed by its excessive force. Sid Vicious came in place of Matlock after the album came into existence.

Sex Pistols started a tour of America which ended in a disaster. The audiences were not impressed by punk music. The end of The Sex Pistols came in Winterland, San Francisco in January 1978 when Lydon walked out of the stage after the show. However, in 1996, Lydon, Matlock, Cook and Jones came together again and entertained the Sex Pistol fans with a conducted tour.

Next year the group had an album, “Filthy Lucre Live” to their credit. In 2000, Julien Temple directed a documentary, “The Filth and the Fury” depicting the history of the Sex Pistols.

After the Sex Pistols, John Lydon formed a new band, Public Image Limited (PiL) after the closure of the Sex Pistols. The new group could not match the notoriety of the Sex Pistols but still has managed to survive even after thirty years. Lydon was finally able to use his nickname, the Rotten in 1986 after a prolonged legal battle with McLaren. He wrote the Sex Pistols autobiography, “Rotten: No Irish, No Blacks, No Dogs” in 1994.

Lydon was also active with a series of TV projects such as Rotten TV for VH1 in 2000, John Lydon’s Megabugs for Discovery in 2006. He also contributed to a couple of nature specials: John Lydon Goes Ape, and John Lydon’s Shark Attack.