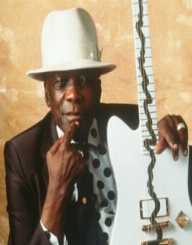 American blues musician John Lee Hooker was born on the 22 August 1917 in Clarksdale, Mississippi. He was the son of a sharecropper, William Hooker and his wife, Minnie Ramsey. Hooker was the youngest of eleven children born to the couple. His father was also a Baptist preacher.

John Lee Hooker, along with his siblings, was homeschooled.

When John Lee Hooker was a child, his parents divorced, and his stepfather was a blues singer who taught Hooker to play the guitar. His sister Alice was the girlfriend of Tony Hollins, who also tutored Hooker on the guitar and who gave him his first guitar. Hooker later said that Hollins had a lasting influence on his music.

In his early teens, Hooker left home and moved to Memphis, Tennessee where he became a street performer. He found work in factories and during the early 1940s  worked for the Ford Motor Company in Detroit.

At the same time, John Lee Hooker continued his interest in blues music playing in various clubs and bars. He slowly built up a reputation as a musician and was also beginning to compose music. In the late 1940s, he recorded a demo tape for Bernie Besman in Detroit which was released by Modern Records in Los Angeles. Boogie Chillen was an instant hit and was one of the bestselling records of 1949.

Throughout the 1950s, John Lee Hooker continued writing and recording, at times under various pseudonyms. He also began recording and touring with Eddie Kirkland. Hooker toured Europe in 1962.

John Lee Hooker had a hit with Dimples (1964) on the UK Charts, and around this time, various rock musicians became aware of his talent and were keen to record with him. In 1970, he recorded Hooker ‘n Heat with the rock band Canned Heat.

Recordings with artists such as Van Morrison, Steve Miller, Carlos Santana, and Bonnie Raitt followed, and he toured extensively. Hooker also appeared as a street musician, Street Slim in the hit film The Blues Brothers (1980). The Healer (1989) brought him widespread attention once more, and he appeared in a tribute concert at Madison Square Garden in 1990. He continued recording into the 1990s including the albums Chill Out and Don’t Look Back.

That Shaped Rock and Roll list. Boogie Chillen also appears on the Recording Industry Association of America’s Songs of the Century list. In 2000, Hooker was presented with a Grammy Lifetime Achievement Award.

He had a daughter Francis McBee Hooker (b.1943) with Hopes and seven children with Mathis: Diane Hooker-Roan, Zakiya Hooker-Bell,