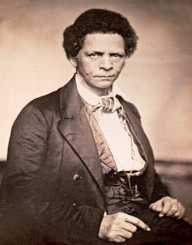 John Brown was an abolitionist who led armed anti-slavery raids in Harpers Ferry, Virginia. He believed that violent action was the only way to bring an end to slavery.

John Brown was born on May 9, 1800, in Torrington, Connecticut. His parents were Owen Brown and Ruth Mills, and he was the fourth in a brood of eight (second son). John Brown’s ancestry went back to English Puritans. In 1805, the family moved to Hudson, Ohio, where Owen started a tannery. John learned tannery from his father and became a foreman in the family’s tannery. He decided to move to Plainfield Massachusetts, in hopes of becoming a Congregational minister in 1816. But the ministerial ambition was short lived. He returned to Hudson to his family,  working briefly for his father before venturing out on his tannery outside town with his adopted brother

His parents instilled in him firm belief in the Bible and hatred of slavery. John Brown was in the Congregational Church before the 1840s, and he never joined another Church.

On June 21, 1820, John Brown married Dianthe Lusk. Their first child, John Jr, was born a year later. In 1825, they moved to New Richmond, Pennsylvania to build a tannery, with a cabin and a barn. John Brown also made money raising cattle and surveying. Dianthe bore him seven children and died after giving birth to her last child in 1831. After that, John Brown married Mary Ann Day, who was sixteen in 1833. Mary Ann Day went on to have thirteen children with John.

In 1836, John Brown moved his family to Franklin Mills, Ohio (present day Kent). Due to the Economic Panic in 1837, he suffered significant financial losses and was jailed once for staying in a farm against claims of the new owner. John was declared bankrupt by a federal court on September 28, 1842. In twelve months of the bankruptcy, four of his children died of dysentery.

In the mid-1840s, John Brown went into partnership with Col. Simon Perkins of Akron, Ohio. The Brown family moved into a home across the street from the Perkins Stone Mansion located on Perkins Hill. John convinced his partners to send him to England to sell wool, but that venture failed. The merchants preferred cheaper low quality wool compared to more expensive but better Springfield wool. In 1854, Brown and Perkins dissolved their relationship.

John Brown became an active abolitionist when he was in Springfield from 1846 until he left in 1850. John Brown became a parishioner at the Sanford Street Free Church, where he witnessed abolitionist lectures by Frederick Douglass and Sojourner Truth. There, he outlined his plan to lead a war to free slaves to Frederick Douglass, including the establishment of a "Subterranean Pass Way" in the Allegheny Mountains. John also helped publicize David Walker's Appeal Speech. In 1848, John Brown heard of Gerrit Smith's Adirondack land grants and decided to move his family to live there for two years.

The United States passed the Fugitive Slave Act in 1850; it was to aid in the return of escaped slaves and imposed penalties on those who assisted in their escape. John Brown retaliated with a militant group to prevent slaves' capture—the League of Gileadites.

The Kansas-Nebraska Act of 1854 gave citizens of the two places the right to choose to either permit or prohibit slavery. In 1855, John Brown moved to Kansas after learning that pro-slavery forces there were militant, and his sons were unprepared. He left for Kansas, making several stops to collect funds and weapons. On the way there, he stopped to participate in an anti-slavery convention, and drum up more financial support.

In May 1856, The Sacking of Lawrence, a sheriff-led posse led to the death of two men. Lawrence, Kansas was founded by anti-slavery settlers to keep Kansas a "free state." The incident made worse the guerrilla war in Kansas Territory, initializing Bleeding Kansas in history. John Brown then moved into Pottawatomie Creek, killing pro-slavery settlers there. Captain Henry Pate from Missouri attacked and captured John Jr. and Jason Brown. Both of John Brown’s sons were arrested and mistreated in confinement. The incident mentally scarred John Jr.

John Brown led a successful retaliation and captured Captain Henry Pate, whom he had forced to sign a treaty and traded with Colonel Edwin Summers for his sons.

On August 30, 1856, John Brown defended Osawatomie with only twenty six people. Although he lost the fight, his struggle earned him the nickname “Osawatomie Brown” and infamy as an anti-slavery fighter. When the new governor of Kansas, John W. Geary, ordered both parties to disarm and offered clemency, John Brown left Kansas with three of his sons.

John Brown led twenty- one people to raid a U. S. Arsenal at Harper’s Ferry on the night of October 16, 1859. The Raiders managed to capture a few prisoners, but the local militia had them trapped inside the firehouse. Two days later, the  U.S. Marines, under the command of Army lieutenant colonel Robert E. Lee, broke into the building. Ten raiders were killed, and seven more were captured, including John Brown.

John Brown was convicted of murder, conspiracy to incite a slave uprising, and treason against the Commonwealth of Virginia.  He was hanged at Charles Town, on December 2, 1859. John embraced his martyrdom, citing that he would die for the cause. After he was hanged, his widow buried him in North Elba, New York.

The Harper's Ferry Raid and the hanging of John Brown were thought to be the catalysts of the civil war. The South regarded his attack on Harper's Ferry as incitement of slave rebellion, while the North saw John Brown as a martyr who sacrificed for the sins of the nation. He was portrayed on the screen like a madman on 1940 film Santa Fe Trail and more sympathetically in Seven Angry Men.