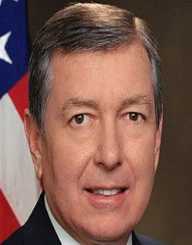 John Ashcroft is a US Senator of the Republican party who was elected and served two terms at the Senate.

John Ashcroft married his wife Jane and had three children together with her. One of their children, Jay, currently serves as the Secretary of State of Missouri.

Born on May 9, 1942, as John David Ashcroft in Chicago, Illinois, his parents were Grace and James Robert Ashcroft. His mother was a homemaker while his father served as a congregation minister and president of Central Bible College from 1958 to 1963 as well as Evangel University from 1958 until 1974. The family relocated to Springfield where the young Ashcroft attended the local schools situated there.

Upon graduating high school, he enrolled at Yale University where he graduated in 1964. While attending Yale, he became a member of the fraternity Sigma Tau Gamma and the St. Elmo Society. After graduating from Yale, he pursued a degree in the University of Chicago's School of Law where he attained the degree in 1967.

John Ashcroft entered the world of politics in 1972 by running for a congressional seat in Missouri which he lost to Gene Taylor. From there, he was appointed as the State Auditor by Missouri governor Kit Bond. He lost the position two years later in 1974 to George W. Lehr stating that Ashcroft was not cut out for the job as he is not an accountant.

From State Auditor, he moved on to being Assistant State Attorney General to John Danforth and eventually claiming the State Attorney position in 1976.

John Ashcroft became the governor of Missouri in 1984 and won the election against Ken Rothman with 57 percent of the votes, the highest amassed vote for a governor in the history of Missouri. He was reelected for a second term in 1988 and served as the National Governors Association's chairman from 1991 to 1992.

As Missouri governor, Ashcroft aided in the enforcement of a number of laws. During his tenure, he helped increase the local government enforcement's funding which was drastically raised from 1985 until 1992. The number of arrest for juveniles who committed a crime increased in the same year until 1985.

John Ashcroft was elected to a seat in Senate in 1994 when John Danforth vacated the position. As a senator, one of the notable things he did is the opposition against the encryption restrictions by the Clinton Administration's Clipper and extended the clear-cutting for several drugs.

President-elect George W. Bush appointed him as US Attorney General in 2000. During the infamous 9/11 incident, Ashcroft served as the supporter of the USA Patriot Act. He resigned the position in 2004 after Bush's re-election on November 2004.

Besides his involvement in politics, John Ashcroft also has a number of activities he poured himself into. He was part of The Singing Senators, a barbershop quartet that performed at social events along with other senators.

Before that, he was actively involved in singing and even recorded a track entitled "Let the Eagle Soar" in 2002. The track was widely made fun of by comedians such as Stephen Colbert and David Letterman.

He also authored a number of books under his name such as On My Honor: The Beliefs That Shape My Life which was released in 1998 and Lessons from a Father to His Son that was published in 2002.

He established his firm, The Ashcroft Group, LCC which offered strategic consulting in May 2005.