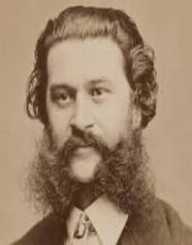 Johann Sebastian Strauss was born on October 25, 1825, in Neubau. He was the eldest child of the three siblings born to Johann Strauss. His brothers were Josef and Eduard.

Strauss came from a musical family. His father was an established musical name in Vienna. From an early age, Strauss took an interest in music. He started taking secret violin lessons from his father's band member. The classes ceased when his father discovered it. Johann became a clerk in a bank. While as a banker, he secretly continued studying music under Franz Amon.

Their father abandoned the family for a mistress called Emilie Trampusch. Johann Strauss then left the bank for music. He studied in a music school owned by Professor Joachim Hoffman. Other teachers who influenced his talents were Joseph Drechsler and Anton Kollman.

In 1844 while Johann Strauss was just nineteen years, he formed his band. Due to his father's dominance, Strauss was not allowed to perform by the owners. The owner of Dommayer’s Casino gave him a chance. He started off with performances at the local Hietzing restaurant. The music competition with his father started. This move angered his father. The elder Strauss never performed at the casino again.

In 1845, Strauss beat his father to claim the honorary Bandmaster Award. His career took a twist in 1848 during the revolution in Austria. Strauss sided with the dissidents, unlike his father who was loyal to the monarch. The Austrian royal family denied him several musical awards. The locals, fearing a backlash from the king never allowed him to perform. Strauss was once arrested in Vienna but never charged in court.

Upon his father's death in 1849, Johann Strauss decided to merge the two bands. This gave him more recognition and acceptance among the opera owners. A new monarch took power in Austria after the 1848 revolution. To endear himself, Strauss composed some patriotic songs praising the new rulers.

In 1853, due to illness, Johann Strauss suffered a nervous breakdown. The musical schedules proved too much for him. His younger brother Josef took over the band. After seven weeks, he came back to the band. With the new band, Strauss went on to tour Europe. He received invitations to perform in Germany, Italy France, and Poland. Strauss also visited England and the US.

He was invited by the Russian Tsar to perform in Russia in 1855. This was during the opening of a new railway line. The following year, he performed at the Vauxhall Pavilion in St Petersburg. In Russia, he also performed for Prince Michael. From 1856 to 1865, Strauss went back to Russia once a year for his annual performances.

In 1863, Johann Strauss met the French composer Jacques Offenbach in Vienna. Strauss was impressed by the compositions. He decided to leave stage conducting and start writing opera songs. His opera compositions proved popular. He composed songs in several traditional dance styles from all over Europe. Strauss’ influence made him the most invited dance musician.

Johann Strauss was married three times. In 1862, he married Henrietta Treffz. Henrietta died in 1878. His marriage was to Angelika Dittrich.

Strauss married the actress about two months after the death of Henrietta. The couple stayed together for nine years. Strauss filed for divorce. His wife was not supportive of his career. Austria’s Roman Catholic Church did not grant him his wish.

In January 1887, he changed his citizenship and left the Catholic faith. Strauss became a citizen of the German Duchy of Saxe-Coburg- Gotha. He got his divorce. In August of 1887, he married Adele Deutsch. She supported his works. Adele was behind compositions like “Kaizer-Walzer” and “Klug Gretelein.”

Johann Strauss died of pneumonia on June 3, 1899, in Vienna. He was 73 years. His remains were interred at the Vienna Central Cemetery.

Johann Strauss attracted both hate and love in equal measure. From his childhood, he had to fight off his father in music. He had his critics in adulthood. One thing is clear; his music endeared all. Strauss left a clear path for other composers to follow.