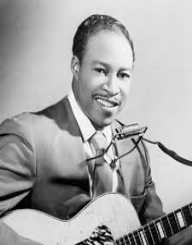 Mathis James Reed was born on September 6th, in 1925. He was a celebrated blues musician and a talented songwriter. His main music style identified as the electric blues was famous to both blues and non-blues audiences. His most notable songs include “Bright Lights, Big City, Big Boss Man, Baby What You Want Me to Do and several others.

Jimmy Reed was born on September 6th, in 1925. His place of birth was in Dunleith, Mississippi. Eddie Taylor, one of Reed’s longtime friends, helped him to learn the harmonica. In 1943, Reed migrated and went to live in Chicago, Illinois. Later, he joined the army offering his services in the Second World War. In 1945, Reed was discharged from the army.

After his brief stint in the army, Jimmy Reed tied the knot with Mary. By the time 1950s reached, he had become a well-known musician. At some point, he partnered with John Brim and Willie Joe Duncan. After this, he entered into a contract with Vee-Jay Records. Initially, he had tried signing with Chess Records, but he did not succeed.

Reed enjoyed his first taste of success after releasing “You don’t have to Go.” This opened doors for him as he continued enjoying immense success over the years. However, Reed experienced a number of issues due to his alcohol addiction. There are times when his wife had to help him recall his lyrics.