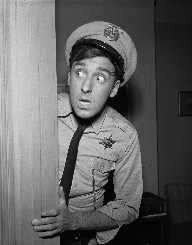 Nabors had severe asthma when he was young, and it stopped him from participating in sports, particularly at school. He took up performance arts instead, joining the glee club in high school. He also sang in the church choir.

After high school, Jim Nabors went to the University of Alabama, and he graduated with a degree in business administration.

Once he finished university, Jim Nabors moved to New York City. He found a job as a typist for the United Nations.

12 months later, Jim moved to Tennessee. He was employed as a film cutter, which was his introduction into the television industry. Nabors’ asthma once again plagued him, so he moved to Los Angeles in the hope it might help his health. Using his experience as a film cutter, he found work at NBC.

During the evenings, Jim Nabors also worked at The Horn, which was a tavern in Santa Monica. He sang and acted. It was while performing at The Horn that Andy Griffith discovered him. Griffith hired him to play one episode on his show, in the role of Gomer Pyle.

He was then given his show, Gomer Pyle, U.S.M.C. Nabors starred in the show for five years, after which time he resigned.

Jim Nabors also had a beautiful singing voice, and made several successful recordings, including the performance of a song in the last episode of Gomer Pyle, U.S.M.C. Nabors had his variety show, The Jim Nabors Hour, which ran for three seasons from 1969 to 1971 before it was canceled. Nabors then went on a countrywide roadshow. Nabors recorded 28 albums in all, and five of them went either gold or platinum.

Between 1961 and 1997, Nabors appeared in around 29 shows, including some that were his own. Some of the popular shows included, The Lucy Show, The Dean Martin Show, The Johnny Cash Show, The Carol Burnett Show, The Sonny & Cher Show, and The Love Boat.

Jim Nabors went on the road for awhile. He had grown tired of the television industry, and opted for concert and nightclub work, including a role in Man of La Mancha. In the 1980s, Nabors appeared in three movies with his friend Burt Reynolds. None of the movies received excellent reviews.

Nabors moved to Hawaii in 1976. He launched a show there which ran for two years, but Nabors then moved out of the spotlight for some time, due to burn-out. He returned to the mid-1980s to perform in Las Vegas for a period.

In 1994, Jim Nabors became very ill and took some time to recover, but from 1997 to 2006, he was back on the stage in Hawaii. The production ran until 2006 when the director, Tom Hanson, died. The final season of the production was dedicated to Tom Hanson.

Jim Nabors contracted Hepatitis B in 1994, which was nearly fatal. He said he got the disease while traveling in India. His liver was failing, but his good friend and fellow entertainer, Carol Burnett, organized a liver transplant for him. Nabors was fortunate to make a full recovery from the transplant.

By far and away, Jim Nabors most famous work was playing the part of Gomer Pyle. He did this successfully on The Andy Griffith Show for two seasons but then went on to get his show which ran for five years, from 1964 to 1969.

Even though the show ran through the period of the Vietnam War, it was still trendy, and it was believed to be due to the show concentrating on the relationship of the bumbling Pyle with is a superior officer, rather than focus on war.

In early 2013, Jim Nabors married his long-time partner of 38 years, Stan Cadwallader. They married in Seattle, a month after same-sex marriage became legal.