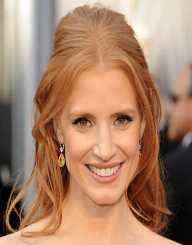 Jessica Chastain is an American actress born on March 24th, 1977. She is best known for her roles in The Help and Zero Dark Thirty. These roles earned her Academy Award nominations. She was listed in the 2012 list of 100 Most Influential People in the World list of TIME. The talented actress co-starred alongside Emma Stone in the film The Help. Also, she acted in many acclaimed films such as Madagascar 3: Europe's Most Wanted (2012), Interstellar (2014) and Miss Sloane (2016).

Jessica Chastain was born on March 24th, 1977. Her place of birth was in California in the United States. She was born to teenage parents Jerri Renee Hastey and Michael Monasterio and has four siblings. Her mother raised her along with her stepfather Michael Hastey. At the age of seven, her interest in acting first passion in acting developed.

In 2004, Jessica Chastain acted her first role in the film when she was cast as Carolyn Stoddard in Dark Shadows of The WB network. In the same year, she also appeared in Veronica Mars. Later, in 2006, she was cast in Close to Home.

The year 2011 marked the turning point for Chastain’s acting career. She had six releases of the film in this year and got high ratings and viewership. Among the films, she played a role in was Take Shelter. She also featured in Coriolanus, The Tree of Life, The Help among others.

In 2014, she was cast in Miss Julie as well as Interstellar. She concluded her acts in this year with A Most Violent Year. Later in 2016, Chastain also featured in The Huntsman: Winter's War. The following year, she served as a provided narration of I am Jane Doe and was also its executive producer.

Jessica Chastain is a talented character hence has earned many awards and nominations throughout her career.  Her role in The Help (2011) earned her two Academy Awards for the Best Supporting Actress.

Also, she was nominated for Academy Awards for the Best Actress for her role in Zero Dark Thirty (2012). For this same role, she earned a Golden Globe Award for Best Actress in a Motion Picture – Drama.

Chastain’s role in Miss Sloane (2016) earned her a nomination for Best Actress in a Drama. For her role in A Most Violent Year (2014), she was nominated for Best Supporting Actress.

Jessica Chastain is a great feminist who has advocated against the discriminations that minorities and women in Hollywood face. During the 2017 Cannes Film Festival, she also spoke against the way women are passive was in which portrayed in most films.

Jessica Chastain is also a philanthropist who puts her efforts and funds to support people with depression. She was motivated to help such people after she lost her sister to suicide in 2003. She also supports institutions whose aim is to help people suffering from mental illnesses.

Not much is known about the personal life of Jessica Chastain for she likes to keep it as private as possible. However, sources confirm that she loves animals and even has a rescue dig which she adopted.

From 2000s to 2010, she was in a relationship with writer and director Ned Benson. Subsequently, she became involved with Gian de Preposulo from 2012. They exchanged wedding vows in June 2017.