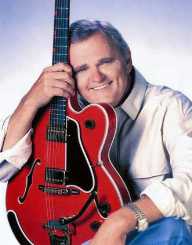 Jerry Reed was born on March 20, 1937, as Jerry Reed Hubbard in Atlanta, Georgia in the USA. He was the son of Robert Hubbard and his wife Cynthia. His parents divorced when he was barely four months old. Consequently, Reed spent his first seven years in child orphanages. He eventually reunited with his mother. Reed got his first guitar as a reunion gift from his mother. He rapidly learned to play the guitar from her.

He attended O’Keefe High School in Atlanta, graduating in 1955. Reed started playing his own composition of music in high school. He wrote his formative songs and sang them in music variety shows in the school.

After graduating from high school, he signed a music contract with Capitol Records in 1955. He recorded songs like Mister Whiz, Creeks Don’t rise, and Here I Am. Reed adopted his musical name, Jerry Reed, dropping his surname Hubbard from his name. Reed recorded thirty songs at Capitol Records.

In 1959 Reed left the recording label and joined the US military. In his military service, he joined the army band. Reed recorded songs and composed some for other singers. In 1962 he composed the song Misery Loves Company, sang by Porter Wagoner. The song became a commercial success in the US. He later joined the Columbia Records nearing the end of military service. He recorded twenty songs with Columbia, leaving the label company in 1963. He moved to Nashville after his discharge from the military.

Reed got his breakthrough in Nashville. In 1964 he signed a recording contract with RCA Victor. He played a studio back up vocalist role for other recording artists for three years. These artists included Bobby Bare and Elvis Presley. He recorded his RCA Victor maiden album in 1967. The album titled The Unbelievable Guitar and Voice of Jerry Reed marked his rise to his illustrious career.

He stayed at the label for twenty years churning songs in both the American country music and pop genres. Reed had a lot of commercial success with his 1971 recording of the song When You’re Hot, You’re hot. Other albums he recorded in the 1970s include Me and Jerry recorded in 1970, Me and Chet released in 1972, and Lord, Mr. Ford released in 1973.

He moved in and out of the RCA Victor to record with other labels during his career. In the 1980s he recorded two albums with Capitol Records. He did the album Lookin’ At You in 1984, followed by What Comes Around in 1985. Other songs he recorded include the 1982 song She Got the Gold Mine.

In 1992 he recorded his album Sneakin’ Around with the Columbia Records. In 1995 he teamed up with his old friend Bill Lowery. Reed did two albums with Lowery’s new recording outfit label Southern Tracks. The albums titled Flyin’ High, and Pickin’ were recorded in 1995 and 1998 respectively. Later in 1998, he joined other artists to form the group Old Dogs. He toured with the group recording one album before he left.

At the fall of 1998, Reed founded his own recording label RIIK Records. He did release commercial hit albums like Jerry Reed Visits Hit Row in 1999, two albums Finger Dancing and Forever Chet in 2000, and Christmas at the Mall in 2007.

Jerry Reed married Priscilla Mitchell from July 9, 1959, to the time of his death. The couple got two daughters Sedina and Lottie. Both daughters became country music singers.

The country music singer and songwriter Reed died on September 1, 2008. After suffering from bad health due to four minor heart surgeries in 1999, he eventually succumbed to breathing complications aged 71.