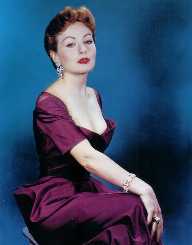 Jeanne  Crain was born 25th May 1925, to George and Loretta Crain. She was born in the city of Barstow, in California, United States, and had one sibling, a younger sister called Rita. Her father was a high school teacher.

Jeanne Crain’s parents divorced in 1934, and she then moved to Los Angeles with her sister and mother. Jeanne  Crain attended Inglewood High School in Los Angeles and then studied acting at the University of California in Los Angeles (UCLA). She also studied at St. Mary’s Academy. Jeanne Crain began to be noticed by talent scouts when she won the ice-skating title of Miss Pan Pacific.

At 18 years of age, Jeanne Crain signed a contract with 20th Century Fox. Her first movie wasHome in Indiana, released in 1944. She did two other films that year. Her first two movies didn’t receive good reviews, and her acting came into question, but she pressed on. In her third movie in 1944, Winged Victory, Jeanne Crain received critical acclaim for her role. It soon became evident that she could sing and ice-skate as well as act, and her other talents were put to good use in some of her movies.

Jeanne Crain worked consistently on her acting, in most cases, filming two to three movies per year. One of her more controversial movies was Pinky, released in 1949. She played the part of a light-skinned African-American woman, who passed as a white woman in the Northern United States. The producer of the movie was too afraid of a racial backlash at the time, and so would not cast an African-American in the role. Apart from Pinky, some of Jeanne Crain’s other movies included Cheaper by the Dozen, People Will Talk, and The Fastest Gun Alive. She starred opposite actors such as Cary Grant, Kirk Douglas, and Vincent Price.

As Jeanne Crain went into semi-retirement, she did less acting through the 1960s. Throughout her career, Jeanne Crain made four radio appearances between 1951 and 1953. She did 12 television shows and one television-movie between 1955 and 1972, and she appeared in 38 movies between 1944 and 1972.

In December 1945, Jeanne Crain married Paul Brinkman, also from the same industry. Her mother didn’t approve, but Crain did it anyway.

The marriage was rocky through the mid-1950s, but the couple reconciled in 1956. In later years they lived separately until Brinkman died in 2003. They had seven children – Paul, Michael, Timothy, Jeanie, Lisabett, Maria, and Christopher.

Charles J. Finlay, a publicist at 20th Century Fox, has documented Crain’s career with a collection of memorabilia. The collection is at Wesleyan University, in Middletown, Connecticut, in the Cinema Archives. Thanks to the efforts of Finlay, Crain’s career will remain immortalized.