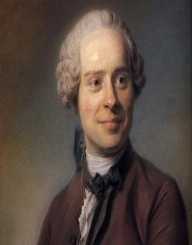 Jean Le Rond d’Alembert was born 16th November 1717, to Louis-Camus Destouches, and Claudine Guerin de Tencin. He was born in Paris, France. His mother was a writer, and his father was an artillery officer. D’Alembert’s father was overseas when he was born, and his mother abandoned him when he was only a few days old. She left him on the steps of a church in Paris, and as was the custom at the time, he was named after the patron saint of the church.

The church placed d’Alembert in an orphanage, but his father found him upon his return and placed him with Madame Rousseau, the wife of a glazier. D’Alembert lived with Rousseau for about 50 years. His father paid for his education over the years, but it was done as he didn’t want to be officially recognized as d’Alembert’s father.

Due to his father’s legacy, Jean Le Rond d’Alembert was able to study at a private school. Under the influence of his adoptive family, he was enrolled at the Jansenist College des Quatre-Nations. He studied philosophy, law, and the arts, and graduated in 1735.

He went on to study law, and in 1738 became a lawyer. He also studied medicine for 12 months, but finally settled on mathematics as his career choice.

In 1708, Charles-Rene Reynaud published a book on mathematics called L’Analyse demontree. This was one of the standard reference books of its day, and even d’Alembert, himself, had used the book during his studies.

In 1739, Jean Le Rond d’Alembert communicated with the Academie des Sciences and pointed out all the errors he had found in the book.

His second noted work was in 1740. It was about fluid mechanics and explained refraction. It was entitled, Memoire sur la refraction des corps solides. The work was recognized by Alexis Clairaut, a prominent Newtonian mathematician, astronomer, and geophysicist at the time.

Recognition for d’Alembert was growing. He was accepted into the Academie des Sciences in 1741, elected into the Berlin Academy in 1746, and was made a Fellow of the Royal Society in 1748.

Jean Le Rond d’Alembert undertook a huge task when he became co-editor of the Encyclopedie (for mathematics and science) with Denis Diderot. From the late 1740s through to 1757, d’Alembert wrote more than a thousand articles for the publication.

In 1752, d’Alembert wrote about what is now called d’Alembert’s paradox.

d’Alembert was elected as a member of the Academie des Sciences in 1754. He became Secretary of the organization in 1772.

In 1749, Jean Le Rond d’Alembert was exposed to music theory for the first time. D’Alembert was asked to write a review of work submitted by Jean-Philippe Rameau. He did so, believing at the time that Rameau’s music theories supported his scientific ideas and could be explained through a mathematical structure.

As the years passed, d’Alembert’s view changed, until the two men were in bitter disagreement. D’Alembert’s final discourse on the matter came in 1762.

d’Alembert researched various subjects over the year and wrote many papers and books. In 1747, he published a paper on his research of applying his calculus to vibrating strings. In 1749, he went on to explain the changing position of Earth’s orbit (the precession of the equinoxes), and also the “nodding” of the Earth’s axis.

Jean Le Rond d’Alembert invented the formula in relation to the wave equation in physics, which pertains to sound waves, light waves, and water waves. The solution is called d’Alembert’s formula.

From 1761 to 1780, d’Alembert kept all his mathematical articles and then published them in eight volumes, called, Opuscules mathematiques.

Jean Le Rond d’Alembert's most important work, Traite de dynamique, was published in 1743. The book was on his laws of motion, and expounded “d’Alembert’s principle” which would go on to become very famous. The principle states “the third law of Newton applies to free bodies as well as rigid or fixed bodies”. (Newton’s third law was that every action had an equal or opposite reaction).

Jean Le Rond d’Alembert was made a Fellow of both the Royal Society, and the Institut de France.

Jean Le Rond d’Alembert never married, but did live with a lady named Mlle Julie de Lespinasse and moved in with her, until she passed away.

d’Alembert has several theorems named after him. One of these is the d’Alembert operator, which plays an important part in modern-day theoretical physics.