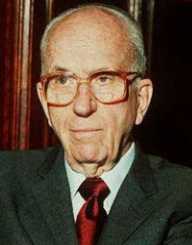 James Albert Michener was an American writer, educationist, and philanthropist. His style of writing gave insight into details. Most of his works were translated into several languages worldwide.

His real origin is in doubt. James Michener was born in Doylestown, Pennsylvania. His official documents say he was born on February 3, 1907. His biological parents abandoned him. He was found and adopted by Mabel Michener. The poor widow became his foster mother.

In 1921, James Michener joined Doylestown High School. He graduated from high school in 1925. Upon graduating, he was granted a college scholarship. He then went to Swarthmore College. Michener continued his basketball passion, playing for the college team. In 1929, he earned his Bachelor of Arts in English and History. He graduated with the highest honors in his class. At the Colorado State College of Education, he got his Master of Arts in Education.

James Michener had a brief teaching career. He taught English at The Hill High School, George School, and lectured at the Colorado State College. Between 1939 and 1940, he lectured at Harvard. From Harvard, he became the education editor at Macmillan Publishers.

Michener was enlisted in the military in 1941. He served in the south Pacific during the WW2. In 1945, he left the navy.

He joined elective politics. During the presidential campaign in 1960, he endorsed John F. Kennedy. Michener ran for elected office and lost in 1962. In 1967, he was a Democrat in the Electoral College.

James Michener's actual writing started during the WW2. He wrote about the experiences he encountered in his missions. His role as Lieutenant provided him with many military assignments. He documented all the cultures, people, and events he met in the south Pacific. The notes and Journals were then compiled. His first publication Tales of The South Pacific was produced in 1947. It was later adapted into a musical comedy in 1949.

Michener published a series of other acclaimed writings. In 1949, he produced the Fires of Spring. Return to Paradise was released in 1951. He then published The Bridges at Toko-Ri in 1953. The following year, he published Sayonara: The Floating World.

He also researched and published geological novels. Hawaii was published in 1959, and The Source in 1965 describes the geological fauna of geographical areas. He did books on Apartheid South Africa, American landscapes and the bullfighting life in Mexico. A Century of sonnets was his last publication done in1997.

James Michener had several honors during his writing career. He got the Pulitzer Prize for Fiction in 1948. The National Association of Independent Schools honored him in 1954 and 1958. He got the Einstein Award in 1967. Three years later, he was awarded the George Washington Award. In 1977, he got the US Presidential Medal of Freedom. He went on to win four other awards. The last one was in 1993. He got the Lone Sailor Award from the US Navy.

James Michener had three marriages. His first marriage was to Patti Koon in 1935. They divorced in 1948.

He then married his second wife in 1948. Her name was Vange Nord. The marriage lasted until 1955.

In 1955, he went for his third wife, Mari Yoriko Sabusawa. She was an American of Japanese heritage.

James Michener made several donations to many institutions. Many of his contributions went to the schools he went to. Swarthmore College received over USD 7 million. To the University of Texas, he donated over USD 64 million. He also donated millions to the James Albert Michener Arts Museum in Doylestown. Michener went to nine universities. In all his studies, he was educated by public funds. He was giving back to the society.

James Michener died in Austin Texas in October 1997. He was 90 years of age. During his late years, his health deteriorated. Michener ended the dialysis treatment he had used for four years. He died of kidney failure. James Michener’s body was not buried, it was cremated. The ashes of his body were laid next to his wife’s grave in Austin memorial park.

Michener had no children. He left behind his estates to Swarthmore College. He rose from abandonment to be one of the best writers in the world. Learning institutions have been renamed to his honor. He was voted by Fortune, the most generous philanthropist in 1996.