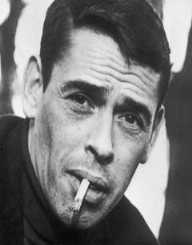 Jacques Brel was a Belgian singer and actor; he is best known for his influence on English speaking artists, Ray Charles, Frank Sinatra and David Bowie.

Jacques Brel was born on 8 April 1929 in Brussels, Belgium. He was the son of Elizabeth Lambertine and Romain Brel. His family were Flemish and spoke French. He attended a Catholic primary school, École Saint-Viateur and was also a boy scout. After primary school, he attended Institut Saint-Louis at rue du Marais, but was a poor student, although he showed an aptitude for history. He showed more of an interest in writing stories and poetry. He began playing the guitar when he was fifteen and also began performing in plays. He failed most of his school exams and after school worked with his father at a cardboard manufacturing plant. His father was the co-director of the company.

Brel was bored by his job and sought inspiration in other outlets. He played football and joined a Catholic youth group, La FrancheCordée. The group carried out charity work helping at orphanages and homeless shelters. Brel relished this work and became very involved with the group. While keeping up his work with La FrancheCordeé, Brel joined the Belgian Air Force in 1948. He reached the rank of colonel and was stationed at a base near Brussels.

Jacques Brel began performing his music for friends and family in the early 1950s. His dark and violent lyrics. Despite this, he began performing publicly and on local radio stations. In 1953, he signed a recording deal with Phillips Records. His first song La Faire was released in March 1953. After the release of his single, Brel moved to Paris. He worked the cabaret circuit in the city and also gave guitar lessons. Brel struggled to make a breakthrough in Paris at first and his greatest early success when Juliette Gréco, a French singer, sang his song Le diable (Çava). The next year Brel toured France building a reputation, and his record label agreed to reach an album at the end of the year Jacques Brel et ses Chansons. By 1955, Brel had become established in France and began touring the French territories in North Africa. He released his second album, Quand on n'a que l'amour, in 1957 and won the Grand Prix du Disque music contest.

The following year Brel toured Canada and released his third album, Au Printemps. Brel had become a star in France and released a fourth album in 1959, La Valse à Mille Temps. Brel went on a world tour in 1960, performing in the Middle East, the Soviet Union and the United States of America. His previous work was compiled into an album for release in America titles, American Début. Brel had become internationally renowned and left Philips Records for Barclay Records in 1962. His first song with Barclay Records was Le Plat Pays, and his first Barclay album was Les Bourgeois.

In 1965, Brel played Carnegie Hall in New York, and his back catalog was licensed to make an American release, Jacques Brel. In 1966, he toured Africa before announcing that he was retiring from live singing performances. Brel continued to record albums, and J’arrive was released in 1968. Brel also produced a musical, L'Homme de La Mancha, for which he also released an album of the same name. The musical was based on the story of Don Quixote, with Brel playing Don Quixote. The show ran for one hundred and fifty shows in Paris. Brel focussed a lot of his energy on acting at this time; he looked to break into film acting. His first on-screen role came in 1967. He appeared in less risques du metier, where he plays a school teacher who is accused of raping one of his students.

Brel produced the soundtrack to Les Risques du metier, and for his next film, La Bande à Bonnot, which was released in 1968. His third film appearance was Mon Oncle Benjamin, a period piece set in eighteenth-century France. Brel made his directorial debut in 1971. He appeared in and directed Franz. The film was praised critically but had little commercial success. Brel continued his prolific filmmaking run by appearing in 1971’sLes Assassins de l'ordre, where he places a judge who oversees and investigation into police corruption. Brel enjoyed huge success in 1972 when he appeared inL'aventure, c'estl'aventure, a crime caper which was a huge box office hit. The following year Brel directed his second film, Le Far West. Brel’s character and his friends search for an imaginary land called the Far West. Brel’s final film wasL'emmerdeur, which was released in 1973. Brel plays a comedic character whose bumbling thwarts the work of a mafia contract killer.

Brel recorded his final album in 1977. Les Marquises was released without any promotional campaign, but despite depending on word of mouth to develop interest, such was Brel’s legend in France that a million pre-orders were placed on the album.

Jacques Brel met his wife Thérèse Michielsen while they were both involved with La Franche Cordée. They married in 1950 and a year later had a daughter together named Chantal. When Brel moved to Paris, he left Thérése and Chantal in Brussels. Thérése was pregnant with their second daughter, France, when he left for Paris. It was not until 1955 that his family joined him in Paris. They returned to Belgium in 1958 as Brel embarked on his extensive tours and his third daughter, Isabelle, was born there. Both of Brel’s parents died within a few months of each other in 1964.

Brel met actress Maddly Bamy in 1972 and began a romantic relationship. Brel spent the last years of his life sailing. He owned a yacht, Askoy II. In 1974 he planned to circumnavigate the world with MaddlyBamy and his second daughter, France. However, it was discovered that he had lung cancer in 1975. Cancer proved untreatable, and he lived out his days in Polynesia with Bamy. Although as his illness worsened, he returned to France. Brel died of a pulmonary embolism in a French hospital on 9 October 1978. He is buried in French Polynesia.

Brel inherited his charitable spirit from his mother. He worked extensively with La FrancheCordée as a young man. In 1974 he donated all proceeds from his single, L'Enfance, to the charity for the mentally handicapped, La FondationPerceNeige.

Jacques Brel was awarded a gold medal by the Belgian Tourist Board in 1964 and received the Grand Prix du Disque from the French Academy.