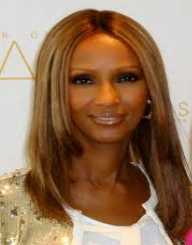 Born as Zara Mohamed Abdulmajid in Mogadishu, Somalia, Iman had 4 siblings. The name Iman was given by her grandfather with whom she spent her childhood before leaving for Egypt, where she enrolled at a boarding school.

Afterward, the family left Somalia when the political climate worsened and relocated to Kenya. Iman pursued political science at the University of Nairobi (UoN).

American photographer Peter Beard was in Kenya at that time. Luckily, Iman was captured by Beard’s lenses, and she immediately moved to the States. In 1976, she signed for Vogue and never looked back. Iman worked with the best designers and photographers. She was a muse of many with French fashion designer Yves Saint Laurent referring to her as his “dream woman”.

After spending a couple of decades in modeling, Iman turned to entrepreneurship and started Iman Cosmetics, her own cosmetic company, in 1994. It was a huge success, especially among make-up artists around the world. The company flourished as the annual revenue hovered around $25 million every year in the 21st century.  At the behest of Home Shopping Network (HSN), Iman created her design line of intricately embroidered caftans. The collection was referred to as Global Chic.

Iman was already a popular figure in the 90s. But her instantaneous success as a model propelled her to take up the film offers very early in her career. Her first film was The Human Factor in 1979, where she worked with stalwarts like John Gielgud and Richard Attenborough under the direction of master filmmaker Otto Preminger.

In the 1980s, she starred in several high-profile films sharing screen space with Robert Redford, Michael Caine, Kevin Costner, Meryl Streep, Gene Hackman, Sally Field, etc. In the 90s, she was seen in Star Trek VI: The Undiscovered Country playing the role of a Chameloid or a shapeshifting alien. Other films include Lies of the Twins, Exit to Eden, L.A. Story, Heart of Darkness, and The Linguini Incident. In the latter, she worked with her betrothed David Bowie.

Iman also appeared in a few famous TV shows like the Miami Vice, In the Heat of the Night, 227, etc. She made a guest appearance on Bill Cosby’s The Cosby Show. The supermodel also hosted reality shows related to fashion like Project Runway Canada and The Fashion Show.

Iman married a wealthy Somali entrepreneur when she was only 18. The couple separated as Iman focused on her modeling career and left the country. After briefly dating Warren Beatty for a while, she unexpectedly married the famous basketball player Spencer Haywood in 1978. They parted ways 9 years later. In 1992, Iman tied the knot with David Bowie in a much-publicized wedding ceremony. The couple remained married for 24 years until Bowie died from liver cancer in 2016.

Iman has two daughters - Zulekha Haywood from her previous marriage and Alexandria Zahra Jones with Bowie.

Iman has donated for several charitable causes. She is a global advocate of CARE. Iman is associated with the NGO Keep a Child Alive and is an ambassador of Save the Children raising awareness for improving the lives of children in East Africa.

Iman was conferred with the Fashion Icon lifetime achievement award by the Council of Fashion Designers of America (CFDA) in 2010.