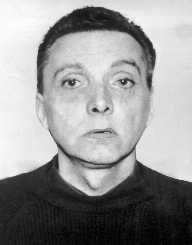 Scottish serial killer Ian Brady was born on the 2 January 1938. His mother Peggy Stewart was unmarried, and he never knew the identity of his biological father. Stewart found it hard to work and manage a baby. When he was four months old, she put him up for adoption, and he was cared for by a foster family. Stewart kept in touch with her son and visited him regularly, although he never knew until his teens that she was, in fact, his mother.

Ian Brady was an intelligent but a socially awkward boy who did not thrive at school.

Ian Brady felt he was superior to most people, referring to them as maggots. He was also extremely cruel to animals claiming to have burnt cats alive and to have thrown rabbits and other small animals from high-rise buildings. At thirteen, he was charged with housebreaking. Ian Brady was also developing a keen interest in Nazism. By the age of sixteen, he was before the courts on his third charge of housebreaking. The court’s ordered him to live with his mother.

Stewart had by that time married Patrick Brady, and they were living in Manchester. It was in Manchester that Brady took on his stepfather’s surname. Although his stepfather found him a job as a porter, he continued with his life of crime. At age 17 he was in prison. After his release in November 1957, Brady did various menial jobs. Then in 1959, he got a job as a stocktaking clerk in a chemical firm. It was there, in 1961, that Myra Hindley started working and they became friends.

Brady and Myra bonded. The pair began seeking out people who had been convicted of animal cruelty and targeting them. They used to throw bricks at the homes of their chosen victims, sometimes physically assaulting them.

Brady devised a plan to abduct a child. He went on to convince Myra that they could get away with the perfect murder. Their murderous spree which became known as The Moor Murders began on the 12 July 1963 when Pauline Reade (16) disappeared on her way home from an evening’s dancing. Reade was a neighbor of Hindley. In November of the same year, John Kilbride (12) was abducted from a market in Lancashire. He was sexually assaulted and murdered. The following year, on the 16 June 1964, Keith Bennett left home to visit his grandmother and disappeared. On the 26 December 1964, Lesley Ann Downey (10) vanished from a funfair and was found murdered. Their final murder was committed the 6 October 1965 when Brady met Edward Evans in a gay bar and convinced him to go home with him.

Evans, an apprentice engineer, was attacked with an ax, smothered with a cushion and strangled with an electrical cord. Brady’s brother-in-law, David Smith, happened to be in the house at the time collecting miniature liquor bottles and witnessed the murder. He went home and told his wife, Maureen Hindley, what he had seen. She insisted that he notify the police and he did so. When the police arrived at the house on the 5 October 1963, they discovered Evan’s body. Brady lied and said that it was an argument that got out of hand, but subsequent investigations unearthed their other crimes. He was arrested and stood trial.

Brady was given a life sentence on the 6 May 1966 for murdering John, Lesley Ann, and Edward. Hindley was sentenced to life for the murder of Lesley Ann and Edward Hindley. She was also found guilty of protecting Brady after the death of John Kilbride.

In 1985 Brady was declared criminally insane. He was subsequently moved to the Ashworth Psychiatric Hospital in Merseyside Finally in 1987 finally confessed to the murders of Pauline Reade and Keith Bennett. Police took Brady and Hindley to the scene of the crime to try and locate the remains of Pauline Reade and Keith Bennett. Reade's body was found, but no traces of Bennett were discovered. In 1999 Brady went on a hunger strike, and he had to be force fed for some time. Then on the 15 November 2009, Hindley died in prison at the age of sixty.

Brady started a campaign demanding to be sent to a prison in Scotland. In 2010 Keith Bennett’s mother announced that there was to be a privately funded search for her son’s remains. She was desperate to find her son’s body before she died. Brady began suffering seizures in July 1010, and the tribunal into his wish to move to Scotland was put on hold.