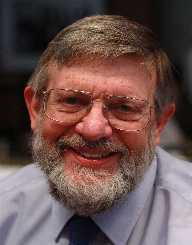 Herbert Kroemer was born on August 25, 1928, in Weimar, Germany. After completion of the Second World War, Weimar was included in the German Democratic Republic (GDR - East Germany). His father was a civil servant and was with the city administration department. His mother was a classical German Housewife. They hailed from simple skilled craftsmen families. Neither of his parents completed their high school education but were determined and very enthusiastic about giving their child the best possible education. Kroemer was the eldest of the three children of his parents.

Herbert Kroemer's mother was very disciplined and strict about the education of her offsprings. Merely doing well in examinations was not enough for her. She expected her children to score the highest marks in their school and relentlessly pushed them to achieve top class performance. Kroemer was brilliant in his studies. He effortlessly sailed through the 12 years of schooling without requiring any assistance from anybody including his parents.

In his school days, in spite of his exceptional academic performance, Herbert Kroemer was notorious for his disruptive activities with the fellow students and had to face frequent punishment for his undisciplined acts. Such was the kind of his disruptive actions that he would have been expelled from his school, had he not been a top performer academically. Kroemer completed his high school graduation from the Gymnasium in 1947.

Herbert Kroemer enrolled himself as a Physics student, which was his favorite subject, at the University of Jena. At the University, he was fortunate to study under the most brilliant lecturer he had ever encountered in his life in the form of Friedrich Hund. However, political suppression started raising its ugly head as early as in early 1948, and the students of rebellious universities like the University of Jena bore the brunt of it. Students were mysteriously disappearing. Some of them were able to escape to West Germany, and others were arrested and sent to work in different mines like the uranium mines near the Czech border.

Herbert Kroemer came to Berlin in 1948 as a summer student with the Siemens Company. Soon, he moved to West Germany in empty return flights of the famous ‘Berlin Airlift.’ He wrote to several West German Universities for admission before moving to West Germany but did not receive any reply. He went to the University of Göttingen after reaching West Germany and met Professor König, as per the advice of his University of Jena Professors.

However, Herbert Kroemer was told that the admission to the Physics department of the University of Göttingen was closed. Professor König asked Kroemer to meet Professor Richard Becker and Dr. Günther Leibfried, who in turn told him to meet Wolfgang Paul and Robert Pohl. These eminent people found Kroemer worthy of studying Physics at the University of Göttingen after carefully evaluating him, and when it was discovered that two of the students who had been admitted were not coming, Kroemer received the acceptance of admission in place of one of these two openings.

Herbert Kroemer had to work in an aluminium factory during night shifts to support his stay and education. Eventually, he started his diploma (MS) thesis on band offsets at hetero-junctions under Professor Fritz Sauter. He received his diploma in theoretical physics in 1951. He immediately began working on his Ph.D. thesis and obtained the same in 1952 on his dissertation on hot electron effects, in the collector space-charge layer of the then-new transistor.

Herbert Kroemer joined the Central Telecommunications Laboratory (FTZ) of the German postal service, a small semiconductor research group as a ‘House Theorist’ after completing his Ph.D. Initially, his work was confined only to answering the theoretical questions asked by any of the group members and giving a weekly lecture on any appropriate topics related to the field. Later, he started working on the frequency limitations of the new transistors. The work led him to the subject of heterostructure and eventually developed the semiconductor heterostructures used in high speed and optoelectronics.

In 1954, Herbert Kroemer went to the United States and joined the RCA laboratories in Princeton, New Jersey as a Research Scientist. He continued his work on heterostructure and published some important papers. Feeling homesick, he came back to Germany in 1957 and joined Philips Semiconductor Research Group in Hamburg as the Group Leader. He again returned to the United States in 1959 and started working with Varian Associates in Palo Alto, California, as a Senior Scientist. In 1966, he left the Institute and joined Semiconductor Research and Development Laboratory as the Head of their new section.

Two years later, University of Colorado offered Herbert Kroemer the position of the Professor of Electrical Engineering, and he joined the University in 1968. He moved to the University of California, Santa Barbara, as a Professor of Electrical and Computer Engineering in 1976 and stayed there until his retirement in 2012. After his retirement, his association with the UCSB continued as he became Professor Emeritus there. His work on various topics of semiconductor kept him busy.

Herbert Kroemer was awarded the Nobel Prize in Physics in 2000 along with Zhores I. Alferov for developing semiconductor heterostructures used in high speed and optoelectronics. Jack Kilby was the other co-recipient of the award. Kilby received one-half of the award for his invention and development of integrated circuit and microchips.

Kroemer had numerous other awards to his credit. Significant among these are the J J Ebers Award in 1973 and IEEE Medal of Honor in 2002.

Professor Kroemer met Marie Louise Kroemer during his student days at the University of Göttingen. Eventually, they tied the nuptial knot and later became proud parents of five children.

Asteroid 24751 was discovered on September 21, 1992. It has been named Asteroid Kroemer in honor of Herbert Kroemer.