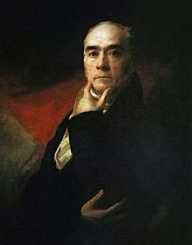 Henry Raeburn was a Scottish man who served as the British royal court painter in Scotland for King George IV.

Henry Raeburn was born in Edinburg on March 4, 1756. He lost his father early in life. Raeburn studied at the George Heriot’s School in Edinburg. In 1771, when he was barely 15 years, Raeburn dropped his formal studies for a vocation. He became an apprentice for a local goldsmith James Gilliland. He impressed his tutor with his ability to paint on ivory jewelry. He started painting on small canvasses. Raeburn graduated to producing full-size oil paintings under his tutor at the goldsmith factory. The earliest documented oil portrait he did is that of George Chalmers done in 1776.

Impressed by his talent, his employer took him to apprentice at Edinburg’s best painter David Martin. Under Martin, Raeburn learned the finer details of oil painting and other artistic styles. He replicated some of the portraits done earlier by Martin. Martin convinced him to begin commercial painting for a living. Raeburn gradually started earning from his miniature paintings. A self-taught painter, Raeburn impressed many with his artistic talent.

In 1784, Raeburn got his first major commission. He was called to do an oil portrait of Mrs. Leslie, the young widow of the late Sir John Leslie, the Earl of Rothes. The young widow soon became close to Raeburn. The two got married within a short time. Raeburn went to study fine art in Italy courtesy of his new rich wife. On his way to Italy, he transited through London. Raeburn got acquainted with Sir Joshua Reynolds who gave him vital connections to famous artists in Rome. Sir Reynolds had a collection of Raeburn’s earlier paintings from an art collector.

After spending two years of learning in Rome, Raeburn and his wife traveled back to Edinburg in 1786. He blended his talent with the Italian experience in his new work. Raeburn settled in Edinburg for most of his life. Most of his peers left Scotland for artistic careers in continental Europe. Though he had immense connections in Rome and Italy, he had little influence in the art world in Britain. As a result of his stay in Scotland, he filled the void left by the migrating painters. Raeburn became the most influential portrait painter of his generation.

With a rich wife of nobility, Raeburn mingled with the high-class society living in Edinburg at the time. During his days, Edinburg became the city of choice for most of the Scottish rich and famous. His early paintings were received with skepticism. But after time, the high-end patrons appreciated the fact that Raeburn was a talented oil painter despite being in Edinburg. Some of his early clients included Sir Walter Scott, Henry Mackenzie, and Robert Fergusson.

Raeburn did some memorable paintings later in his career. Not relegating the earlier paintings into oblivion, some of his later paintings included that of Reverend Henry Wellwood and Dr. Wardrop. He did full-size portraits of Adam Rolland, Lord Newton, Dr. Alexander Adam, and William MacDonald. The last two portraits were incorporated into the Scottish National Gallery display in Edinburg. Raeburn worked with male clients in most of his paintings. Quite often, he did portraits of female clients. The most notable is the full-size portrait of his wife. The portrait which was a private souvenir is regarded as one of his best portraits.

As his fame grew, Raeburn became a sought after figure. He became a member of the Scottish Society of Artists in Edinburg. In 1812, he was elected to the society as its president. In 1814, he joined the Royal Scottish Academy as an associate member with limited rights. A year later in 1815, he became a fully-fledged member of the academy. Raeburn benefitted with the membership of the two societies. He got several commissions of producing buildings and other landmarks in Scotland. The Scottish parliament and other several streets and avenues are modeled along with his earlier paintings.

Raeburn married Ann Edgar in 1784. Ann kept away from the limelight during her marriage with Raeburn. She only came out to support him during exhibitions.

Raeburn died on July 8, 1823, almost a year after being knighted. He was buried at the Saint John Episcopal Graveyard in Edinburg.

During his time he traveled less out of his native Scotland. His work has been appreciated after his death. Sir Henry Raeburn is one of the most recognized painters from Britain and Europe. One of his paintings of Reverend Robert Walker skating on ice was sold in 1949 fetching a huge fortune for the Scottish National Gallery. The portrait of the so-called Skating Minister became the symbol of Scottish cultural heritage.

The self-taught painter revolutionized the artistic landscape of the Scottish world. He produced over a thousand small paintings and full-size portraits in his career spanning five decades.