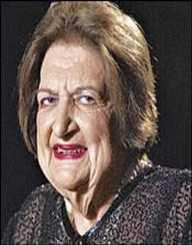 Helen Amelia Thomas was an American reporter and author. Born on August 4, 1920, she worked for the United Press and the later United Press International for 57 years. She was a long-time member of the White House press corps and covered ten US presidents. Thomas served as a White House reporter from the administration of President John F. Kennedy to the second year of President Barrack Obama.

She started her almost seven-decade journalism career with Washington Daily News as a copygirl before joining the United Press, which later became the United Press International (UPI) in 1943 as a correspondent. In 1960, she became the White House bureau manager. After leaving the UPI, she worked as a columnist for Hearst from 2000 to 2010.

Thomas became the first female officer of the National Press Club and the first female member and later president of the White House Correspondents’ Association. She is the author of six books including Listen Up, Mr. President: Everything You Always Wanted Your President to Know and Do (2009) with co-author Craig Crawford.

Helen Amelia Thomas was born on August 4, 1920, in Winchester, Kentucky to Mary and George Thomas. She was the seventh of ninth children by her parents. Her parents were Lebanese migrants from Tripoli. Upon entering the United States, her father’s surname "Antonious", was anglicised to Thomas. Her parents moved to Detroit, Michigan, when she was four years.

She received education from Detroit Public Schools and later at the Eastern High School, during which she decided to become a journalist. After graduating, she enrolled at Wayne University in Detroit, where she worked with the campus newspaper. In 1942, she graduated with a bachelor’s degree in English.

After graduating from the university, Helen Thomas moved to Washington, D.C. where the Washington Daily News hired her as a copy girl. She was fired eight months later for joining her colleagues in a strike action. In 1943, she joined United Press as a reporter for its radio wire service. Thomas was assigned to the United States Department of Justice in 1955, and later to agencies like the Capitol Hill and the United States Department of Health. From 1959 to 1960, she was the president of the Women’s National Press Club. United Press became United Press International in 1958.

Helen Thomas began covering President John F. Kennedy from November 1960. In January 1970, she was made a White House correspondent. As a correspondent, she became known as the "Sitting Buddha," and the "First Lady of the Press” for asking blunt questions. Thomas was the only print journalist to join President Richard Nixon on his trip to China.

In 1974, she became UPI’s White House bureau chief, a position she held for 25 years. A year later, she became the first female member of the Gridiron Club. News World Communications, Inc., founded by the Rev. Sun Myung Moon acquired UPI in May 2000 and Thomas left the company on May 17, 2000, after 57 years of service.

After leaving UPI, Helen Thomas joined Hearst News Service as a columnist in 2000. She worked in that capacity until 2010 when she resigned after her comment on the Israeli-Palestine conflict was termed as anti-Semitic. Thomas in her comment on the conflict said, "Tell them to get the hell out of Palestine." and "Remember, these people are occupied and it's their land. It's not German, it's not Poland...”. In 2011, she started writing a writing a column for the Falls Church News-Press.

Helen Thomas married Douglas Cornell at the age of 51. Cornell died in 1982, after being diagnosed of Alzheimer’s disease just four years into their marriage. Thomas died on July 20, 2013, at her home in Washington, D.C. at the age of 92. She was cremated with the ashes buried in Detroit.