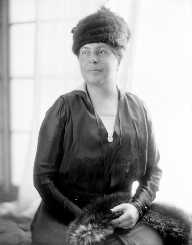 Helen Taft was born 2nd June 1861, in Cincinnati, Ohio, United States. Her parents were Judge John Williamson and Harriet Collins Herron. Her father was a Judge, and her mother’s father as well as her brother were both U.S. Congressmen.

Helen Taft was one of eleven children and was called Nellie rather than Helen. She attended a private school called the Miss Nourse School, and she was there from 1866 to 1879. After that, she attended the University of Cincinnati.

In 1882, Helen Taft started teaching and taught in various schools until she got married in 1886. After returning from their honeymoon, Taft encouraged her husband to move into politics. His preference was to remain in the legal system, but he allowed Taft to drive him. From 1900 to 1903, Helen Taft moved the family to Manila in the Philippines, where her husband had taken the position of Governor-General. In 1904, he became Secretary of War, which enabled further travel.

Helen Taft became the First  lady in 1909 when her husband took up the presidency, and they remained in the White House until 1913. Helen Taft was a progressive thinker and a trailblazer during her tenure as First Lady. She was the first First Lady to take place in the presidential inauguration parade. Helen Taft also attended cabinet meetings, although refrained from making any comment.

It was Helen Taft that introduced musical entertainment to be performed after state dinners,and this has since become a tradition in the White House. Another tradition started by Taft, was that of the United States marine Band playing for the public’s enjoyment in West Potomac Park.

Helen Taft suffered from a stroke in 1909. It affected her right arm and leg, and her speech. 1909 was the beginning of her husband’s presidential term, but with the help of her four sisters, Helen Taft was able to carry out her duties as First Lady. When the 1913 election was lost, the family returned to Cincinnati. Her husband taught law, and Helen Taft wrote her memoir, Recollections of Full Years, which was published in 1914. Helen Taft’s husband was appointed to the Supreme Court in 1921. This was another first, as Helen Taft became the only woman to not only be the First Lady, but wife of a Chief Justice.

Helen Taft was also outspoken in support of the women’s suffragist movement. When she became First Lady, Helen Taft also started working on improving working conditions for female employees. She was vocally opposed to Prohibition, as was her husband, and when they entertained at the White House, alcohol was served.

Helen Taft's major work and legacy, was the 3,000 cherry blossom trees she had planted in West Potomac Park. Helen Taft had them planted where musical concerts were performed, and people from everywhere were able to enjoy the area.

Helen Taft married Nellie Herron in June, 1886. They got married in the home of Taft’s parents. After the wedding, the couple spent a few days in New Jersey, and then three months in Europe.

The couple had two sons and one daughter.