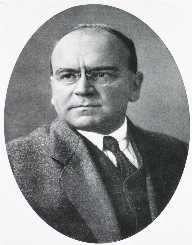 Heinrich Otto Wieland was born on June 4, 1877, in Germany. His parents were Elise and Theodor Wieland.

As a youth, Heinrich Otto Wieland attended the Technical High School in the town of Stuttgart.

It was in 1911 that Heinrich Otto Wieland made one of his first big discoveries. He found that that there were different kinds of nitrogen in organic compounds. He would later go on to write a paper about his findings that would not be published until 1932.

In 1913, Heinrich Otto Wieland began working as an associate professor at the Technical University of Munich. He continued to work at the pharmaceutical company while teaching, and he was soon made an advisor within the company (Boehringer Ingelheim). Two years later, while researching, he made the compound arsenical diphenylaminechloroarsine. In 1917, he was promoted from associate professor to full professor at the Technical University of Munich.

In late 1917, Heinrich Otto Wieland was sent to work at the Kaiser Wilhelm Institute because Germany was deeply involved with World War I and they needed Wieland’s knowledge of chemistry. For the war effort, he was hired to find a way to synthesize mustard gas. However, he did not find a way to do this before the end of the war, and he stopped looking into it at that point, so he never discovered how to do it.

In 1925, Heinrich Otto Wieland switched schools again, this time teaching at Ludwig Maximilian University. Here, he also continued to research. One of his main topics of study was that of bile acid. His discoveries on this subject would later earn him a Nobel Prize. Also around this time, Heinrich Otto Wieland wrote many papers on various chemistry topics.

In the mid-1930’s, tensions were rising in Germany before the beginning of World War II. Things were tough for Jewish people around this time, but Heinrich Otto Wieland wasn't prejudiced against them. In fact, he helped to get many of his Jewish students out of Germany and into the United States. If his students would not escape, Heinrich Otto Wieland hired them in his lab. Since Heinrich Otto Wieland was a well-respected scientist, the Nazis did not try to take away the Jewish people who were hired by him. However, near the end of the 1930’s, he had to hide away the Jewish people, so they were not be taken. Not even his great reputation could help them near the start of World War II.

During World War II, along with taking care of the Jewish people Heinrich Otto Wieland had hidden away for their own safety, he continued his research. It was around this time that he studied poisonous mushrooms and was able to isolate one of the chemicals in them: alpha-amanitin.

Throughout the rest of the 1940’s to the end of his life, he continued his research but did not make any new major discoveries.

All of Wieland’s awards and accomplishments are due to his work in science. Some of his most prestigious awards are listed below.

Heinrich Otto Wieland was also a Fellow of the Royal Society.

Heinrich Otto Wieland died on August 5, 1957. The cause of his death was natural causes due to old age. He was 79 years old when he passed away.

In 1964, the Heinrich Wieland Prize (named after him) has been given out to help fund scientists working in chemistry and other scientific disciplines.