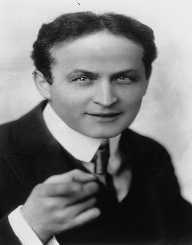 Harry Houdini was born under the name Erik Weisz in Budapest on March 24, 1876. His family was Jewish. Houdini was one of 7 children in the family. In 1878 his mother, who was then pregnant and his four brothers arrived in the United States. They changed their surname to Weiss, and Erik became Ehrich since the name sounded more German. The family lived in Appleton, Wisconsin where his father served as a Rabbi. When his father got the U.S. citizenship, he and Ehrich moved to New York and lived in a boarding house. Once he found a permanent home, the rest of the family joined.

When Harry Houdini was still a child, he took several jobs to help the family. He made his public debut at age nine as a trapeze artist and called himself Ehrich, the Prince of the Air. As a young boy, he was a cross-country running champion. When he was a teenager, Houdini was coached by the magician Joseph Rinn.

Houdini started his career in 1890 when he took his stage name Harry Houdini after the French magicians JeanEugene Robert-Houdin and Harry Kellar. The start of his career had little success. He performed at museums, sideshows, and even circus. He started out with card tricks but soon after started to experiment with escape acts.

In 1893 Houdini and his brother Dash were performing together when they met a fellow performer Wilhelmina Beatrice Rahner. She was courted by Dash at first, but Harry grabbed her attention. The couple married in 1894, and Bess became the stage assistant for Houdini.

In 1899, Harry Houdini met his future manager Martin Beck in Minnesota. He was impressed by Houdini’s escape from handcuffs and suggested to only focus on escape acts. He booked him on the Orpheum vaudeville circuit, and within months, Houdini was performing at the top houses in the country.

In 1900, Houdini was booked to tour Europe. In London, he even gave a demonstration at the Scotland Yard. His performances were scheduled for six months, and his salary reached $300 a week. He toured England, Scotland, Germany, France, and Russia.

Houdini’s acts were a big hit, and his fame rose with every new performance. Houdini challenged local police to restrain him. In some cases, he was stripped naked and searched. In Cologne, Houdini was accused of bribing the police to help him in escaping. He sued the officer who made the accusations and won the case when he opened the Judge's safe. With his significant wealth, Houdini bought a dress that was said to be prepared for Queen Victoria. He arranged a reception and presented his mother in the suit. In 1904 he returned to the United States.

From 1907 throughout 1910 he performed in the United States and was very successful. Harry Houdini freed himself from jails, straitjackets, handcuffs, ropes, and chains. His handcuff act was widely imitated therefore Houdini dropped it from his bill.

Instead, he started to escape from locked, water-filled milk can. He also began to invite the public to devise the contraptions to hold him. Some of these included a crate packed with nails and lowered in the water, mail bags, and once even in the belly of a whale.

In 1913 Harry Houdini introduced his act Chinese Water Torture Cell. He was suspended upside down in a locked glass and steel cabinet, full of water. He held his breath for more than three minutes.

He and his brother Theodore also performed together by escaping from straitjackets. On one occasion, they both were hanging upside-down from a roof of a building. His most famous non-escape illusion tricks, which he performed at the New York Hippodrome, was when he made an elephant vanish.

In 1923, he became the president of Martinka & Co - America's oldest magic company. He was also the president of the Society of American Magicians (S.A.M.). Houdini had a vision for the magician's society. Wherever he performed, Houdini always addressed the local magic club and even threw the banquet for its members. He knew that the small magician's clubs were weak, but under a healthy body, they can be more powerful. He recruited the small clubs to join the Society. During Houdini’s time, the Magicians society was stronger than ever. He was the president of S.A.M. for nine consecutive times, until his death in 1926.

Other Exploits Outside Of Magic

In 1906, Harry Houdini began to release his publication Conjurers’ Monthly Magazine. The journal was meant to be a competitor to The Sphinx but was only published in two volumes. Houdini was praising his acts and attacking his rivals. Later, he wrote a book The Unmasking of Robert-Houdin. He struck his former idol as a liar and fraud. In 1909 he wrote a book explaining some of his tricks.

He was also passionate about aviation and film. Houdini purchased a French Voisin biplane and attempted to be the first person in Australia to fly, in 1910. He took the plane with him when touring Australia. Later it turned out that he was defeated only by few months by Captain Defries, who made a short flight in December 1909.

Houdini was also interested in movies. He started his acting career in 1909. Since then, Houdini appeared in several movies. He even started his own production company- Houdini Picture Corporation and a film lab The Film Development Corporation.

Harry Houdini died on October 31, 1926, from peritonitis due to ruptured appendicitis. Speculations were that his death was caused by McGill University student, who gave him surprise punches to his stomach. Houdini permitted the student to do so, to test whether it is true that punches didn’t hurt him. That day he went on to perform in extreme pain and with a fever. He was advised to have surgery but declined it. Other reports have said that he didn’t know that he had acute appendicitis. It has also been speculated that Houdini was poisoned by a band of angry spiritualists.