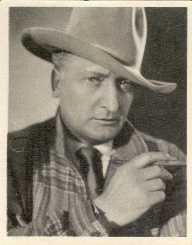 German actor and singer Hans Albers was born in Hamburg, Germany on the 22 September 1891 to Philipp and Johanna Alberts. He was interested in singing and acting, and in 1907, unbeknown to his parents, he started having private acting lessons.

Between 1911 and 1914 Hans Albers worked in a silk company in Frankfurt at the same time appearing in small roles in various theatrical productions. He starred twice at the Thalia Theatre in Hamburg.

Albers was drafted into the Army in 1915. After being wounded and hospitalized in Wiesbaden, he later moved to Berlin after the war and found work singing and acting in theatre. His performance in the play Verbrecher (The Criminals) in 1928 was well received.

By the end of the decade, Hans Albers had appeared in scores of silent films. As his popularity as an actor increased, his songs became popular. He also had a starring role in the play Liliom at the Berlin Volksbühne (1931).

Albers appeared in the first German talkie film; The Night Belonged to Us (Die Nacht gehört uns) in 1929. His next talkie film was starring with Marlene Dietrich in The Blue Angel (Der Blaue Engel). His breakthrough film role was The Copper (1930) which was directed by Richard Eichberg who also made an English version entitled Night Birds. The Copper was a huge success and established Alberts as a major star.

During the late 1930s until 1945 Albers lived quietly on his property on Lake Starnberg. For a while, his partner Burg lived there with him. He attempted to distance himself from Nazism and refrained from performing on stage until 1945. He continued making films which were successful in Germany. One of these films was Münchhausen (1943).

When Hans Albers moved to Berlin as a young man, he met the actress Hansi Burg, and she was his partner until his death in 1960. She was the daughter of actor and director Eugen Burg who was at one time was Albert’s drama teacher. Hansi Burg, who was half-Jewish, escaped to London during the height of Nazism and returned after the war to live with Albers. Her father died in a concentration camp during World War II.