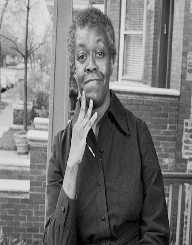 Gwendolyn Elizabeth Brooks was an American poet, teacher and an author. She was born on June 7, 1917, in Chicago. Her father was David Brooks while the mother was Keziah Wims. Gwendolyn began her interest in poetry while she was young. She developed a passion for poetry and later in life, won several awards for her work and influence. Her work revolved around highlighting the plight of the ordinary African-Americans. In her works, she described the struggle that the African-Americans put against racism and poverty.

Gwendolyn had a unique way of using personal experiences that allowed her to connect well with the targeted audience. By 20th century she had written more than 20 poetry books that made her win numerous awards including the prestigious position of the Poet Laureate of Illinois in 1968. She held this position until her death on December 3, 2000.

Gwendolyn Elizabeth Brooks was born on June 7, 1917, in Topeka, Kansas. She was the first born to the family of David Anderson Brooks and Keziah Wims Anderson. Her father worked as a janitor for a music company while her mother was a school teacher. The mother was also a concert pianist in classical music.

Gwendolyn's family moved to Chicago when she was only six weeks old where she grew up. She began writing while she was still a young girl and her mother encouraged her that one day, she would be like Lady Paul Laurence Dunbar. She loved growing up in Chicago city and once acknowledged that she was doing better than she would have done in Topeka. She even labeled herself as an "organic Chicagoan" in a 1994 interview.

She later transferred to Wendell Phillips High school. The school had an all-black student body. She then went to the Integrated Englewood High School.

In 1936, Gwendolyn graduated from Wilson Junior College now called Kennedy-King College. During her school days, Gwendolyn faced racial discrimination and injustices that made her understand the plight of black people and the poor in the society.

After these experiences in the early education, Gwendolyn decided not to pursue a degree course. By then, she knew that she wanted to become a writer. She acknowledged that she was not a scholar but an ordinary girl who is passionate about writing.

Gwendolyn Brooks’ interest in writing started while she was still a young girl. She published her first poem when she thirteen years. The poem "Eventide" was published in the magazine called American Childhood. This gave her a lot of drive that made her start writing more poems.

When she was sixteen years, Gwendolyn had written and published an estimated seventy-five poems. Great writers commended her for penning the beautiful poems. Key among them were James Weldon Johnson and Langston Hughes. Both were prolific writers in the United States of America.

When she was seventeen years, she submitted her poems to Chicago Defender, an American-African newspaper. The newspaper had a column on poetry where Gwendolyn wanted her poems published. She used different styles while writing the poems including ballads, sonnets and sometimes used rhythms in free verse.

By 1941, Gwendolyn had already started taking part in poetry workshops. She attended a seminar organized by the influential Inez Cunningham Stark, a white woman who had a strong literary background. She offered workshops to African –Americans and Gwendolyn took the chance with open hands. The workshop helped her to identify her area, and she gained immense techniques from her predecessors. Langston Hughes passed by and listened to Gwendolyn as she read her poem "The Ballad of Pearl May Lee." The performance encouraged her to work harder on her poems.

In 1945, Gwendolyn published her first poetry book "A Street in Bronzeville" with Harper and Row. The book captured the problems faced by the desperately poor and the immigrants particularly the color discrimination against the blacks in the United States of America.

The book was applauded for its authenticity and the real reflection of life in Bronzeville. She acknowledged the help of Paul Engle who reviewed her work in a column in the Chicago Tribune newspaper. Her criticism against racial discrimination and poverty started to be accepted by the Americans.

In 1946, Gwendolyn Brooks received her very first Guggenheim Fellowship. She was also listed among the "Ten Young Women of the Year" in Mademoiselle Magazine.

In 1949, Gwendolyn wrote her second poetry book "Annie Allen." This book craftily described the life and challenges of a young girl who grew in the Bronzeville. The book became very popular and was awarded Pulitzer Prize for Poetry in 1950. In the same year, she received an award from Poetry Magazine. The award "Eunice Tietjens Prize" coupled with Pulitzer award was the best thing that had happened to her by then. It triggered more interest in people to read her poems.

In 1953, Gwendolyn published a book called Maud Martha. The book described the life of a young black woman, Maud Martha. The narrative stamped her interest in changing the mindset of black people and encouraging them to view themselves equal to all human beings despite facing blatant discrimination.

In 1967, Hughes, the most effective mentor to Gwendolyn Brooks, died. She vowed to work hard in honor of her departed mentor, Hughes. In the same year, Gwendolyn attended her Second Black Writer's Conference at Fisk University, Nashville.

Gwendolyn Brooks taught creative writing to Chicago's Blackstone Rangers which was looked into as a violent gang of criminals.

In 1968, Gwendolyn wrote a poem that received accolades from all quarters. The poem "In the Mecca" is a long poem describing a desperate search for a child by her mother in a Chicago apartment. The poem connected so well with the Americans. The poem was nominated for the National Book Award for Poetry.

"A Street in Bronzeville" of 1945 was her first poetry book. It brought to light the sufferings of the poor and the blacks in the United States. It connected well with the ordinary American facing racial prejudice, harsh economic times and acts of violence.

"Maud Martha "was her first novel consisting of 34 sketches. The book describes the frustrations of a black African woman suffering from discrimination and in desperate search of self-confidence and respect. The setting is in a Chicago apartment where the woman sought for her child in despair. This setting resonated well with the audience.

"The Bean Eaters" a book made up of her best verses.

"Annie Allen" a poetry book that won her several awards including Pulitzer Prize for Poetry in 1950.

Gwendolyn won numerous awards. Key among them include;

In 1990, the works of Gwendolyn Brooks were recognized and honored by the Chicago State University. The university started the Gwendolyn Brooks Centre for Black Literature and Creative Writing. This center helped the students access the work of Gwendolyn and further contributed her work to be well-known across America.

In 1997, Gwendolyn turned eighty years. During her birthday, she was honored with tributes from all over America.

Gwendolyn Brooks died on December 3, 2000, at her home in Chicago. This was after a long battle with cancer.