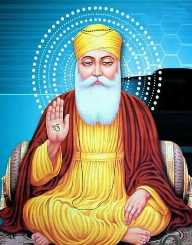 Guru Nanak was an Indian religious leader and is best known as the founder of Sikhism.

Nanak was born in R?iBhoiK?Talva???, a town near Lahore in what is now modern-day Pakistan on 15 April 1469. His parents, Mehta Kalu, and Mata Tripta were both parts of the Hindu merchant caste. Nanak moved with his older sister, BebeNanaki, to Sultanpur in 1475 to live with her and her husband. Sikh tradition tells of some notable moments in Nanak’s childhood. He was said to have been blessed with great wisdom as a child and was far superior in his learning than any other at his school, including the teacher. Another story tells of the sleeping Nanak being shaded from the sun by a cobra. Other accounts tell of Nanak using his money to feed the homeless instead of becoming a merchant as his father wished. Even from an early age, it was said that Nanak rejected the Caste system and would also interact regularly with Muslims.

Some recognized that Nanak was quite intelligent and he was encouraged to study and travel to extend his knowledge. It is said he traveled across southern Asia. Tradition states that he traveled to Mecca and Baghdad to debate Muslim scholars as well as journeying to Tibet. These stories have little grounding in history and the more extravagant stories claim that Nanak traveled to Jerusalem and Rome. At the age of thirty Nanak was said to have had a vision. Nanak then disappeared for three days, and only his clothes were found by those who went to search for him. When he returned, he declared that there was only one God and he was neither Muslim nor Hindu, and all should follow his path.

Nanak claimed that his vision had taken him to the court of his God and been told to spread his word. After this declaration Nanak was given the title Guru, it also marks the beginning of the Sikh religion. Nanak was followed by nine more human gurus who form the teachings of Sikhism. Nanak’s teachings form part of the Sikh holy text the Guru Granth Sahib. The Guru Granth Sahib contains 974 hymns from Nanak. There are different views of Nanak from biographers and historians; some viewed his work as an effort to reconcile Islam and Hinduism, while Sikhs view him as an illuminated spirit who was granted the truth by God.

Nanak is not viewed as a prophet in the Sikh tradition as no such concept exists. Instead, he is simply seen as a human granted the wisdom to explain the truth about God. Sikhism does not focus on hearing the voice of God, but rather the improvement of the human mind so that it can perceive the reality. There is no need for priests or a stringent religious structure as there is an only man and God. In their most distilled form, Nanak’s teachings can be broadly described as, share with the less fortunate, work hard and honestly and meditate on God’s name.

Nanak also teaches of the Five Weaknesses or Thieves; these are sins or vices that rob a person of their senses. The Five Weaknesses are Lust, Greed, Rage, Conceit, and Attachment. The Five Weaknesses are overcome by the Five Virtues, Love, Contentment, Compassion, Humility, and Truth. Sikhism rejects all divisions such as gender, religion, and caste. Nanak left his work and family to spread his message of love and the oneness of God. Nanak appointed Bhai Lehna as his successor, and he became the second guru.

The first written accounts about Nanak were the Janams?kh?s. Early Sikhs wrote the Janamsakhis (Birth Stories) after the death of Nanak and over some years. Bhai Mani Singh, a Sikh scribe, wrote the Gyan-ratanavali, an account of Nanak’s life. The Gyan-ratanavali was also written many years after Nanak’s death.

Nanak married Mata Sulakkhani in 1487. Together they had two children; sons named Sri Chand and Lakshmi Chand. Tradition holds that Sri Chand lived for a hundred and thirty-five years and founded the Udasi sect of Sikhism. Nanak died on 22 September 1539.