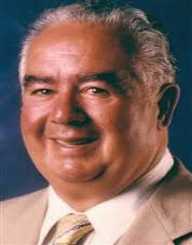 Talking about the Mexican food, “tacos” comes to the mind of every person around this world. It’s not that Mexican cuisine contains only one hit dish and that is why tacos got so popular; it is because of the love of Mr. Bell for the Tacos and a Taco selling chain of restaurants: Taco Bell. Yes, it is because of Taco Bells that we all love Mexican Tacos.

Glen William Bell Jr. Alias Glen Bell was born on September 3, 1923, in Lynwood, California to Glen and Ruth Jonson Bell. Glen’s father was a construction worker who struggled hard to get the work. He was one of six children of the lovely couple.

As Glen Bell's father did not have sufficient money for the family, Glen Jr. grew up selling the produce to help his struggling father. The family moved to a small farm in Oregon when Glen Jr. was just five years old. During that time, the great depression hit the country and to fight against it; he again started selling cottage cheese door to door.

When he was 12, the family moved to a small 10-acre farm outside of San Bernardino in Cedar Springs. It was owned by Bell’s grandmother, and here again, young Glen Jr. started selling eggs, apples, and flowers. Maximum childhood of Glen Jr. was spent in struggling to collect funds for their survival.

At 16, Glen Bell hopped freight trains and reached Iowa Washington in search of work. He learnt to bake blackberry pie with his grandmother and started selling them as well. In the year 1941, after the completion of his graduation, Glen worked for the U.S. forestry service and then, served in the U.S. Marine Corps during World War ll. He worked as a waiter there and served the top military brass there. His job as a waiter worked as a foundation into the food business. He learnt how to manage food and the importance of clean, hygienic and prompt service.

After a while, when Glen Bell started his very first hot dog stand, he wanted an expansion of the business and therefore, sold it to his in-laws in the year 1952 and built a new stand. On this new stand, he sold hamburgers and hotdogs. After a while, Bell started selling Tacos at a taco stand named Taco Tias at San Bernardino area. The first ever tacos were sold for just 19 cents each.

Bell opened three Taco Tias in the San Bernardino area within the time span of just one year, i.e., 1954-1955. Bell sold all these three taco restaurants, and with his partner, Ed Hackbarth opened a new restaurant named Del Taco in the year 1964.

Glen Bell also partnered with Al McDonald and built the first Taco Tia stand in San Bernardino. They built Taco Tias along the riverside and Redlands. Bell sold these to Al McDonald as he did not agree for the expansion of the business.

Meanwhile, in the year 1962, Glen Bell decided to go solo for his interest and sold all the stands and restaurants to his partners. It was this time when Bell started his first Taco Bell in March 1962 in Downey. Interestingly, the name Taco Bell was given by one of Glen’s friends who were into real estate business, Bob Trujillo. Glen’s Taco Bell received a massive response from the audience, and in the coming two years, He opened eight new chains of the same across the area.

Looking at the popularity of Taco Bells, Glen decided to franchise it, and the very first franchise operation was opened in Torrance, and that too became a big hit among the audience there.  To a surprise, Glen’s business expanded outside California as well. His first chain of restaurants opened in Scottsdale, Ariz. The number of Taco Bell restaurants reached 80 by the time this branch opened. In 1967, headquarter of the Taco Bell was built in Torrents, and architect Robert McKay was made as the president to look after the work.

The company gained a lot of popularity and owing to the same, the very first public stock offering of the company was made by Glen Bell in the year, 1969. The chain increased, and it has 868 restaurants opened till now. It was then sold to PepsiCo in the year 1978 for $125 million in stock.

Glen Bell had a difficult childhood where he had to work to earn money for the family continuously. He got married to Dorothy Taylor in the year 1947, and the couple gave birth to their son; Rex. As Glen wanted to expand his business, he was most of the time working throughout the day and this lead to some of the disturbances in his private life. Unfortunately, he got divorced from Dorothy after six years of marriage in the year 1953.

Later, in the year 1955, Glen Jr. married Martha, a teacher and they lived happily together until Glen Jr. left for heaven. He is survived by two children from the second marriage, namely Kathleen Bell and Garry Bell, three sisters; Delores, Dorothy, and Maureen.

Owner of world-famous Taco Bell chain, Glen Bell died because of a heart attack at the age of 86 on January 16, 2010.

Glen Bell was a modest person and concerned towards the society. He bought 4-H animals at local livestock auctions and donated them for resale. The funds collected from the resale were then used for providing scholarships to the students. Bell Jr. was a regular supporter of the Salvation Army Scripps Hospital, YMCA, and Boys & Girls Club.