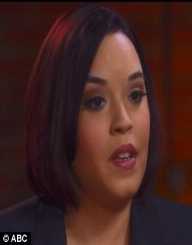 Gina DeJesus was born on April 1, 1990. She is an American Lady. She is renowned for being held captive for ten years by a kidnapper. She is currently Twenty Eight years old.

Gina DeJesus was born on April 1, 1990, in Cleveland in Ohio, United States. She was born to Felix DeJesus and Nancy Ruiz. She was brought up alongside two siblings. In 2003, she was attending Wilbur Wright Middle School. She was walking from home to School which was forty blocks away and vice versa. In 2004, she appeared in ‘America’s Most Wanted’ a national television program for three years consecutively.

In 2004, Gina DeJesus was going home from school when she was given a lift by Ariel Castro a former school bus driver. She later disappeared. Her mother had given her some bus fare to board a bus home which she did not since she decided to walk. She was then taken to Castro’s basement in Tremont, Cleveland where she was held captive.

Soon after the disappearance, Gina DeJesus' parents raised the alarm after she did not return home. They worked together with the FBI in searching for DeJesus. DeJesus was held captive alongside other two women Michelle Knight and Amanda Berry. They suffered assault of different kinds. They were raped frequently and impregnated, but most pregnancies ended in miscarriages due to the assaults they underwent. While being raped Castro would feel the guilt because she was her daughter’s friend and he knew her family;  so he covered her head.

In 2004, Anthony who was Castro’s son and a journalist published an article of her disappearance. In 2013, DeJesus alongside the other two women and a child who was born by Berry were freed. Berry ran to the front door soon after Castro had left the house and called for help. Two neighbors Angel Cordero and Charles Ramsey came to their rescue. DeJesus and the two women underwent medical attention. She had a restricted movement around her neck due to the chains she was subjected to after abduction while young.