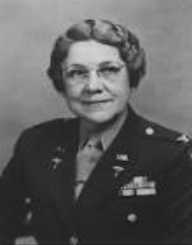 Florence Blanchfield was born on April 1st, 1884. She is famous for she was a United States Army Colonel. Aside from this, she served as Army Nursing Corps’ superintendent. In 1945, Blanchfield was bestowed with a Distinguished Service Medal. Later on, in 1947, she received a military commission. As a result, she became the first woman to earn such a commission.

Florence Aby Blanchfield was born on April 1st, in 1884. Her place of birth was in Shepherdstown, West Virginia. She was the fourth born child to Mary Louvenia and Joseph Plunkett Blanchfield. Her mother Mary worked as a nurse while her father was a professional stonecutter.

Blanchfield enrolled for a public school in 1898. After this, she joined the Oranda Institute. Later, she went to Southside Hospital Training School where she graduated in 1906. Subsequently, she took her studies at the Johns Hopkins Hospital.

Sooner or later, she managed to join the Army Nurse Corps in 1917. She offered her services, first in France as World War I was started in Europe. After that, when the war came to an end, she continued offering her services in different army hospitals.

During the 1930s, Florence Blanchfield was called to offer her services to the superintendent’s office. Around this period, she was promoted to become an assistant superintendent to Julia Flikke. Sooner or later, she rose up the ranks and became a captain in 1939.

Julia Flikke retired from her post in the mid-1940s, and thus Blanchfield took the opportunity of serving as a superintendent. At the onset of World War II, Blanchfield commanded about 60,000 nurses working locally and abroad.

Due to her achievements in her career, Blanchfield was bestowed with the Distinguished Service Medal in mid-1940s. In 1951, the International Red Cross also awarded her with the Florence Nightingale Medal.

Bearing in mind that Florence Blanchfield was an Army Nurse, this prevented her from getting married in her lifetime.

Florence Blanchfield passed away on May 12th, in 1971. She was 87 years old at the time of her death.