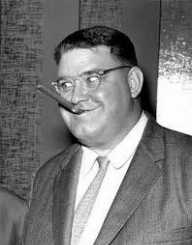 Ferdinand Waldo Demara was born on 21st December 1921 in Lawrence, Massachusetts, in the United States. He came from a wealthy family. His father, Ferdinand Waldo Sr., worked as a motion picture operator.

During the Great Depression, however, Demara's father lost the family wealth. The family moved from their upper-class suburb to a poorer section of town. Demara ran away from home when he was 16. He joined the Cistercian monks on Rhode Island, and he lived with them for several years. In 1941, Demara enlisted in the U.S. Army.


A Career as an Imposter

Ferdinand Demara started impersonating others in 1942. He took the name of one of his army friends, Anthony Magnolia, and he went absent without leave.

He tried to join two different monasteries, but he failed. Demara then enlisted in the Navy and trained as a hospital corpsman. When he failed to get the position he wanted, Demara faked his death. After that, he took another name, Robert Linton French. As French, Demara became a psychologist with an emphasis on religion. He taught psychology at Gannon College in Pennsylvania.

Ferdinand Demara then worked as an orderly in Los Angeles, and an educator at St. Martin's College in Washington. The FBI caught him, and he went to a Naval Disciplinary Barracks for 18 months as a deserter.

Once again, after leaving the prison, he took on another fake identity. He took night classes where he studied law, and he then joined the Brothers of Christian Instruction in Maine. The order was Roman Catholic.

During his time with the Brothers, Ferdinand Demara met Joseph C. Cyr, a doctor. He took Cyr's identity and pretended he was a surgeon. He served onboard the HMCS Cayuga of the Royal Canadian Navy.

The vessel served during the Korean war, and Demara performed successful surgery during his stint onboard.

There were several Korean soldiers with severe injuries. They were brought on board for medical care. Damara went to his room and did speed-reading on general surgery. He performed the necessary operations, and none of the prisoners died.

When the Navy found out Damara was an imposter, they quietly discharged him from the Navy. They didn't press charges, as the Navy did not want the embarrassment.

While Ferdinand Demara was with the Christian Brothers, he established a college in Maine with State funding. When the Brothers offended him by not making him chancellor or rector, he left the order in 1951.

Soon after leaving the Order, Demara sold his story to Life. He had various short-lived jobs, due to his face now being recognized. In the late 1950s, he appeared on different television shows. These included a game show called Take a Good Look, and a quiz show called, You Bet Your Life.

During the early 1960s, Ferdinand Demara was a counselor. He worked at the Union Rescue Mission in Los Angeles. Demara then graduated in 1967 from the Multnomah School of the Bible in Oregon. He became pastor at the Cherry Grove Baptist Church, but he resigned once word got out of his past.

Demara then began work at the Good Samaritan Hospital of Orange County as a visiting chaplain. The hospital nearly sacked him in the late 1970s when they found out about his past. Fortunately for Demara, the Chief of Staff stepped in and vouched for him, so he kept his position.

While he worked at the Hospital, Ferdinand Demara also lived there. He stayed there when he became very ill in 1980 and had to stop working. Demara completed the last rites for actor Steve McQueen in 1980. The two had become close friends, and Demara had several notable friends. On 7th June 1982, Ferdinand Demara died of heart failure.