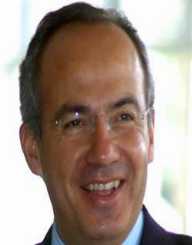 Former Mexican President Felipe de Jesús Calderón Hinojosa was brought into existence on August 18, 1962, in Morelia, Michoacán, Mexico. He is the youngest of his parents’ five sons. His father late Luis Calderón Vega was one of the co-founders of the conservative Partido Acción Nacional (National Action Party - PAN). Born into a political family, Felipe grew up in Morelia, capital of Michoacán State of Mexico.

As a young boy, Felipe was quite involved in his father’s political activities including his campaigns for the party. He extended his hand in distributing party pamphlets and flyers, shouted slogans in party gatherings as well as while traveling onboard party campaign vehicles. He moved to Mexico City after completing his high school study and studied law at the Escuela Libre de Derecho, a distinguished law school of Mexico.

Upon securing a Bachelor’s degree in Law from there, Felipe Calderon attended the Instituto Tecnológico Autónomo de México (ITAM) and earned a Master’s degree in economics. He continued to study further and obtained a postgraduate degree in Public Administration from the John F. Kennedy School of Government at Harvard University.

Being the son of the co-founder of PAN, one of the three principal political parties of Mexico, Felipe Calderon remained active in his father’s political party from his elementary school days itself. He became the president of PAN’s youth organization during his early twenties. He was a member of the legislative assembly as a local representative.

In the Federal Chamber of Deputies, he represented his party from 1991 to 1994 for two consecutive terms. He returned to Michoacán in 1995 and contested the state governorship election under the banner of his National Action Party (PAN). However, he lost the election.

Felipe Calderon succeeded his mentor Carlos Castillo Peraza as the Secretary-General of PAN in 1993 after the latter became the President of the party. Felipe assumed the party presidency in 1996 replacing Carlos Castillo Peraza and served the post until 1999. PAN came into national prominence after its candidate Vicente Fox won the Mexican Presidential election of 2000. The victory marked the culmination of the 71 years of continuous rule by the Institutional Revolutionary Party (PRI) and also a new beginning for PAN being brought into the national power for the first time.

Felipe Calderon served as the leader of the party’s Chamber of Deputies delegation from 2000 to 2003 before being elevated to serve as the minister of energy from 2003 to 2004. His campaign for nomination as the party’s presidential candidate early on made Vicente Fox relieve him from the ministry position. In 2005, he won the internal party primaries to emerge as the party candidate for the 2006 Mexican Presidential election.

In a see-saw electoral battle, Felipe was declared the official winner of the 2006 Mexican Presidential election after a long drawn battle between him and center-left candidate Andrés Manuel López Obrador. The winning margin of Felipe was only a wafer-thin 0.56 percent of the total votes polled. His opponent disputed the result, claiming large-scale malpractices and flaws. Following many protests, a partial recounting was ordered, and Felipe was subsequently declared as the official winner of the election. He was sworn in as the 56th president of Mexico on December 1, 2006.

One of Felipe Calderon's major achievement as the Mexican President is the passing of criminal justice reforms bill in 2008. His presidency saw some of the most turbulent times in the Mexican history including the gang wars between the notorious Mexican Drug Cartels and the Great Recession. The Great Recession accounted for an acute reduction in the GDP of the country which saw a decline of 4.7%.

However, the adoption of some sustained economic recovery measures resulted in a growth of 5.11% in the following year. His presidential term of six years concluded on November 30, 2012. Known for his opposition for immigration policies of American President George Bush, he decriminalized undocumented immigration into Mexico and passed a bill to this effect.

Felipe Calderon always displayed great concern for the undocumented Mexican immigrants in the United States and hoped to resolve the matter amicably. When U.S. Senate disapproved the Comprehensive Immigration Bill, he criticized the decision as ‘grave error.’ He is entirely against erecting a wall between Mexico and the United States.

Felipe Calderón married lawyer and fellow party politician Margarita Zavala in 1993. They together have three children. He is one of the youngest Presidents of the Mexican history.