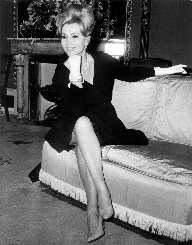 Hungarian born American actress Eva Gabor was born on the 11 February 1919  in Budapest to Vilmos and Jolie Gabor. She had two sisters, Zsa Zsa and Magda and in the 1930s, immigrated to the United States in 1939.

Before immigrating to the United States, Eva Gabor had trained as an ice skater as well as a singer. Her first film appearance was in Forced Landing (1941) followed by a part in The Last Time I Saw Paris.