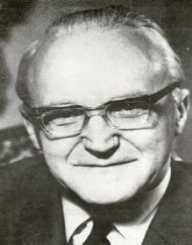 Composer and educator Eugen Suchon was born on the 25 September 1908 in Pezinok, Slovakia. He showed musical ability at a young age and his father, a choirmaster, and organist, encouraged him to study music.

In 1923 at the age of twelve, Eugen Suchon was enrolled at the Bratislava Music School and was taught by pianist and composer Frico Kafenda. In 1930 he became a pupil at the Bratislava Academy of Music. He graduated in 1939 and was immediately recognized as a major talent with the success of Violin Sonata in A Flat Op.1 and String Quartet Op2. The brilliance of these two works meant that he won a place at the Prague Conservatoire where he did two years postgraduate study under the composer Vitezslav Novak (1870-1949).

Eugen Suchon was appointed Professor of Theory at the Bratislava Academy in 1933. He was later promoted to the teacher of composition. His pre-war compositions had a big impact on Slovakian musical culture typified by his Psalm of Sub-Carpathian Land.

In 1941 Eugen Suchon began his first opera Krutnava (The Whirlpool), a libretto based on Milo Urban’s Behind Upper Mill.

By 1948 he was head of the Department of Music Education at Bratislava Teaching Training College. And in 1949 he completed Krutnava which had taken him nine years to write. This opera is regarded as a pioneering work and is considered the first Slovak opera. It was successful at home and abroad, with many foreign productions. During this time his output included the Fantasies for Violin and Orchestra as well as Metamorphoses, an orchestral work.

His work during the 1970s and 80s included his Symphonic Fantasia on Bach. Elegy and Toccata (1977) and in the 1980s his Three Songs for orchestra and bass voice. He also produced his Kaleidoscope for piano utilizing his harmonic theories. In 1978 he published his Theory of Chords. Then in 1979, he supervised the performance of The Whirlpool America. The event was to celebrate Suchon’s 70th birthday. Dennis Burkh conducted and sang an English translation. The performances took place on the 12 and 14 January 1979.

Between 1933 and 1938 Eugen Suchon was Secretary of the Czechoslovak Union of Musical Professions for Slovakia. He was also head of the examination committee for composition at the University of Performing Arts, Bratislava and chair of the festival committee at the Bratislava Music Festival.

From 1945 until 1976 Eugen Suchon was head of the preparation committee for the Slovak Performing and Mechanical Rights Society during which time he assisted in the setting up of the Slovak Philharmonic in 1950.

During 1971 he became a member of parliament in the Slovak National Council and held this position until 1982.

Eugen Suchon died on the 5 August 1993 in his hometown of Bratislava.