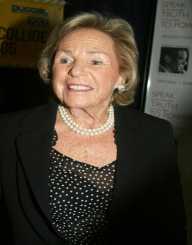 Ethel Kennedy was born on April 11, 1928. She is an American activist. She is a widow to the late Senator Robert F. Kennedy who was assassinated in 1968. She is the founder of the Robert F. Kennedy Center for Justice and Human Rights. The Organization is a nonprofit charity which works to realize the dreams that were left behind by Robert Kennedy. His goals were that of promoting peace and justice in the world. She was awarded a Presidential Medal of Freedom by President Barrack Obama.

Ethel Kennedy was born on April 11, 1928, in Chicago, Unites States. She was born to George Skakel who was a businessman and Ann Brannack who was a secretary. She was brought up alongside five siblings Georgeann, James, George Jr., Rushton, Patricia, and Ann. She attended an all-girls’ school, Greenwich Academy in Greenwich. She also attended the Convent of the Sacred Heart in Manhattan. In 1945, she joined Manhattanville College of the Sacred Heart in Manhattan. At the college, she was a classmate of Jean Ann Kennedy, Robert F. Kennedy’s sister. She met Robert for the first time in 1945 during a ski trip to Mont Tremblant Resort in Quebec. Robert began dating Ethel at the time when she was campaigning for his elder brother, John F. Kennedy. She campaigned for him in his campaigns in 1946 for the United States Congress.

Ethel Kennedy married Robert Kennedy in 1950 at St. Mary’s Catholic Church in Greenwich. Her wedding regalia was created and designed by fashion designer Mamie Conti. After their wedding, they moved to Charlottesville, Virginia where Robert was taking his law degree at the University of Virginia Law School. After he graduated from law school, his family moved to Washington DC where he went ahead to work at the Department of Justice.

Ethel Kennedy and Robert campaigned for John Kennedy who later on became the President of the United States. They would go on trips on behalf of the President and the First Lady. President Kennedy was assassinated, and the news of his death devastated Ethel. She worried too much about the late president’s children. Ethel and Robert had eleven children together, Kathleen, Joseph, Robert Jr., David, Courtney, Michael, Kerry, Christopher, Max, Douglas, and Rory.

In 1968, Robert F. Kennedy was assassinated by Sirhan Sirhan who was sentenced to life imprisonment for the crime that he had committed. His death affected Ethel Kennedy, and she vowed that she would never get married to anyone again. She was escorted to events by their family friend Andy Williams. She continued to live at their family home which was situated at Hickory Hill in McLean, Virginia. In 2009, the family home was sold for $8.25 million. In the same year that her husband was assassinated, she founded the Robert F. Kennedy Center for Justice and Human Rights. The organization is a nonprofit charity that advances Human Rights through advocacy, litigation, and education.

In 2008, Ethel Kennedy endorsed Barrack Obama during the Democratic Party Presidential primaries. She hosted a $6 million fundraiser dinner at Hickory Hill for Obama. Ethel decided to appear in a documentary titled ‘Ethel’ that was directed by her daughter Rory. The film mostly was about the life she shared with Robert Kennedy and how she raised her eleven children on her own.

In 1981, Ethel Kennedy was awarded the Robert F. Kennedy medal in the White House Rose Garden by President Ronald Reagan. In 2014, she received a Presidential Medal of Freedom presented to her by President Barrack Obama for her cause in advancing peace and justice and her commitment to fighting human right violations.