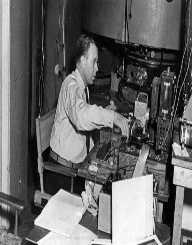 Ernest Lawrence was an American Nuclear Scientist who was awarded the Nobel Prize in Physics in 1939 for the invention of Cyclotron. He was called the “Atom Smasher” - the man who held the key to atomic energy.

Ernest Lawrence was a forceful campaigner of ‘Big Science’ and requirement of big machines. Chemical element number 103 was named Lawrencium in his honor in 1961.

Ernest Orlando Lawrence was born in Canton, South Dakota on 8 Aug 1901. His parents Carl Gustavus & Gunda Lawrence were teachers and of Norwegian descent.

He received his Ph.D. degree from Yale in 1926. On the recommendation of Swann, he received Fellowship from National Research Council and continued working in Yale. In 1928 Ernest Lawrence joined the University of California as Assistant Professor of Physics and later became a full professor in 1930. He became the youngest Professor of the University.

The invention Of Cyclotron

In 1929 Ernest Lawrence came across a design in an article by Rolf Wideroe. He was intrigued by it. The design was a device that produced high energy particles by successive small pushes. Physicists like Rutherford had succeeded in knocking protons. But further disintegration required very high energy. Lawrence was impressed by Rolf’s design and set up a circular accelerating chamber between poles of an electromagnet. The magnetic field would hold the charged protons in a spiral path. After a hundred turns, they would impact the target as high energy particles. He had thus discovered a method of getting particles of high energy without using high voltage. The first cyclotron was only 4” in diameter and cost about $25 only. Lawrence continued building larger and more powerful cyclotrons. By 1932 his team was able to disintegrate Lithium at Berkley Laboratory using cyclotron. They could also accurately measure binding energy. He received the patent for his cyclotron in 1934, but he assigned the royalty to the Research Foundation for Science Advancement.

In 1936 Harvard University made him an attractive offer. However, University of California wanted to retain him and established The Radiation Laboratory with modern amenities. They made Lawrence its Director. Ernest Lawrence was provided with a yearly grant of $20000.  He had to cut costs and so worked with students and junior faculty members who were willing to work for free. In 1939 he built a 60” cyclotron. He succeeded in producing the first radioactive isotope by bombarding iron particles. Lawrence was awarded the Nobel Prize in Physics the same year. Ernest Lawrence also encouraged research in medical therapy. His brother John H Lawrence was a physician and did pioneering work in nuclear medicine.

During the world war, Lawrence was involved in military projects and helped establish the Radiation Laboratory at Massachusetts Institute of Technology.

After the war, Ernest Lawrence campaigned for government sponsorship for large scale projects for ‘Big Science.’ He started using deuteron to disintegrate Nitrogen 17 working on 186’ cyclotron

Ernest Lawrence also played a role in the US project to develop the hydrogen bomb. A nuclear weapon laboratory was set up near Los Alamos and the second one at Livermore in 1952.

The chemical element number 103 which was discovered at Berkley Laboratory was named lawrencium.