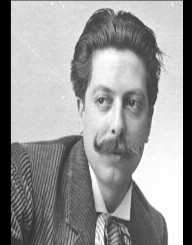 Enrique Granados was born in 1867 in Lleida, Spain. His parents were Calixto Granados and Enriqueta Campina.

Enrique Granados studied piano under Francisco Jurnet and Joan Baptista Pujol in Barcelona; then he continued his studies in France. In Paris, he was tutored by Charles-Wilfrid de Beriot, the son of the Spanish soprano Maria Malibran. Another tutor Felip Pedrell also influenced the young composer and pianist.

When Granados returned to Barcelona in 1889, he as recognized as a brilliant pianist. His 12 Danzas Espanolas became very popular, and his first opera, Maria del Carmen (1889) was met with wide acclaim.

In 1990, he ran a classical-concerts society and also had his piano school. Granados was a prolific composer, writing in the Romance style.

Enrique Granados won fame with his production of Goyescas (1911-1913)This work was written in six pieces and based on paintings by Goya. It was turned it into an opera, but  World War I  (1914-1918) intervened, and the production only went ahead on the 28th January 1916 in New York City.

It was while New York City that Granados was asked to perform for the President of the United States, Woodrow Wilson. The awful outcome of being asked to play before the president meant that Granados had to change his travel plans. He did not make his scheduled boat trip back to Spain. Instead, with his wife who was accompanying him on the trip, they took a boat to England, with the intention of traveling home by ferry across the English Channel.  The ferry, the Sussex,  was torpedoed by a German ship and both Granados and his wife lost their lives.

Died at sea on the 24 March 1916, attempting to save his wife from drowning. They both died in the incident.

His papers are held in the national archives at the National Library of Catalonia.

With the combination of his romantic and nationalistic style, Enrique Granados had a significant impact on future Spanish composers and musicians.