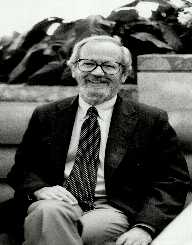 Elmore Leonard was an American author, screenwriter, and film producer. He wrote crime and western fiction with titles such as Rum Punch, 3:10 to Yuma, and Get Shorty.

Elmore Leonard was born on October 11, 1925, in New Orleans, Louisiana. He and his family frequently moved during his childhood, thus settling in Detroit, Michigan when he was 9. Leonard was an avid reader, which inspired him to write fiction. Many of his stories were set in and around Detroit.

Elmore Leonard's first job was as a copywriter at a local advertising agency. When he was not working, he was writing westerns. His first publication was the short story “Trail of the Apache” in Argosy Magazine in 1951. He published his first novel, The Bounty Hunters, in 1954.  Over the course of his lifetime, he published more than 30 Westerns.

Elmore Leonard's novels inspired numerous movies for both theater and television. Some of those westerns, like 3:10 to Yuma was adapted twice for the big screen (1957 and 2007). However, he transitioned into crime novels after the interest in Westerns started to fade. He began writing more crime novels that brought Hollywood back to his door. In the 1970s he wrote screenplays for Joe Kidd, Mr. Majestyk, and the 1987 TV movie Desperado. Get Shorty was a famous film in 1995 followed by Jackie Brown (1997) and Out of Sight (1998).

Leonard has some producer credits to his name. He was the executive producer of the 1997 film Jackie Brown which was based on his novel Rum Punch. Later productions included crime comedies like Be Cool (2005) and Life of Crime (2013). Leonard also produced the TV series Justified that aired from 2010 to 2014.

Elmore Leonard's written works in Western and crime genres were well received, however, they will continue on as well in their film adaptations.  He was known as “The Dickens of Detroit.”

Leonard married Beverly Claire Cline in 1949. The couple had two daughters and three sons. They divorced in 1977. Leonard later married Joan Shepard in 1979 and remained with her until her death in 1993. He then married Christine Kent that same year. They were married for 20 years until his passing in 2013.

Elmore Leonard died on August 20, 2013, at the age of 87 in Michigan. The cause of death was complications from a stroke that he suffered days before his death.

Elmore Leonard has received awards for his screenplays as well as his novels. In 1999, he along with Scott Frank won the Edgar Allan Poe Award for Best Motion Picture for the film Out of Sight. Leonard was awarded the F. Scott Fitzgerald Literacy Award in 2008 for Outstanding Achievement in American Literature. In 2012, he earned the honorary National Book Award for lifetime achievement.