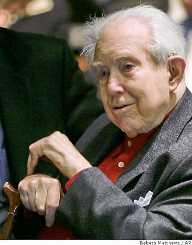 Elliott Carter was an American renowned classical music composer and two times winner of the Pulitzer Prize. He is best remembered for his unique style of complex rhythmic structures and atonality. He was a graduate of Harvard University. In 1994 his composition Violin Concerto won the Grammy Award that year. Other compositions that were performed during his career include chamber music, orchestral, vocal and solo instrumental works. He was among the classical music pioneers of the 20th century. He was also a publisher and published more than 40 works in his later career.  Throughout his career, his work earned him many awards.

Elliott Carter was born on December 11th, 1908. His place of birth was Massachusetts in New York City. He was the son of Elliott Carter and Florence Carter. His father was a wealthy businessman, and his mother was once a member of the Florence Chambers. His interest in Music developed when he was just a small boy. He received moral support and great encouragement from Charles Ives. Ives was a composer and sold insurance to his family at that time.

Elliott Carter studied at the Horace Mann during his early education. He later joined Harvard University in 1926 and studied Music and English.  Meanwhile, he also took music classes at Longy School of Music and studied under professors Gustav Holst and Walter Piston. Ives continued supporting his music career. He made sure Carter attended shows such as the Serge Koussevitzky’s BSO concerts. Later in 1932, he attained his master’s degree in music.

Elliott Carter then joined École Normale de Musique de Paris in Paris in 1932 and studied music under Nadia Boulanger, a prominent composer. He completed his studies in 1935 and received his doctorate. He then went back to the States where he joined the Ballet Caravan as a composer.

Elliott Carter taught music among other subjects at St. John’s College in Maryland. He taught for four years as from 1940. Meanwhile, he continued his compositions that he had done for the Ballet Caravan. He later worked at the War Information office during the Second World War.

After the war, Carter continued his teaching profession. He taught at the Peabody Conservatory from 1946 to 1948. He then became a professor at Columbia University. While there he came up with his work in a sonata for piano. 2 years later he left the University.

In 1955 Elliott Carter taught at Queens College till 1956. After a few years, he became a teacher at Yale University in 1960. He quit the job in 1962 and 1967 he got a position at the American Academy of Arts and Letters. He won the 1981 Ernst von Siemens Music Prize and the National Medal of Arts in 1981.

Elliott Carter work on String Quartets was of great success. His first String Quarters premiered in a performance in Rome. Among those who attended the event was BBC’s, William Glock. Glock took an interest in Carter music and since then featured his music in many BBC radio concerts. In 1959 his second String Quartets premiered. This earned him the 1960 Pulitzer Prize after it became a great success in Music. Along with the prize his second String Quartets composition earned him the UNESCO prize and the New York Critics Award. This took his career to a higher level, and he became quite famous.

Elliott Carter continued his String Quartets Compositions for many years. His 5th String Quartet premiered in Belgium in 1995. He was 87 years old at that time. Even as an old man of over 100 years, he came up with three other compositions.

Elliott Carter tied the knot with Helen Frost in 1939. They were blessed with a son and named him David Chambers.

Elliott Carter took his last breath on November 5th, 2012 in New York City. He was 103 years old at the time of his death.