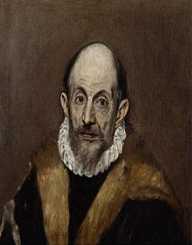 DomenikosTheotokopoulos was born 1st October 1541, in Heraklion, Crete. His father was a merchant and tax collector, and the family was very wealthy. El Greco also had an older brother who followed in their father's footsteps as a wealthy merchant.

El Greco studied at the Cretan School, one of the leading schools for post-Byzantine art. The school initially trained him in religious painting, which was known as icon painting.

By 1563, El Greco had the title of "master." Having the title meant he was a master of his art and operated a studio of his own. One of his early works from the Cretan period was Dormition of the Virgin.

El Greco traveled to Venice in approximately 1567. Venice owned Crete, so it was a natural progression for his work. He worked under the mentorship of Titian, a very well-known painter in Venice.

In 1570, El Greco relocated to Rome. He painted there over the ensuing years, finding a style of his own. His stay in Venice influenced El Greco's work. His Venetian contacts introduced him to the artistic community in Rome where he settled in nicely.

El Greco attracted enemies in Rome due to being outspoken and unconventional. At the end of 1572, he opened a studio rather than working for someone else. He also hired two assistants.

El Greco moved to Spain in 1577. He landed in Madrid, then traveled to Toledo.

One of El Greco's friends, Luis de Castilla, secured El Greco's first commissions in Spain. During the next two years, he completed nine paintings for the Church of Santo Domingo el Antiguo. Thanks to these works, he established his reputation as a painter.

Although El Greco hoped to secure a commission from King Phillip II of Spain, it was not to be. El Greco created two paintings for the king, but King Phillip didn't like El Greco's style. Due to this, no more work was forthcoming.

El Greco returned to Toledo. He opened a workshop, and he hired an assistant, Francisco Preboste, to help him.

In 1586, El Greco completed a commission called The Burial of the Count of Orgaz. The painting become his most famous work.

El Greco was extremely productive until 1607. He received many significant commissions, which were all completed.

In 1608, he became involved in a legal dispute with the authorities over payment for work completed. He also received his last major commission in 1608.

During his career, El Greco also worked as an architect and sculptor. Churches regarded his work in high esteem.

The artistic community ignored El Greco's work after his death. Because it didn't fall into the standard style of the era, there was no interest.

In the late 18th century, the Romantic movement began. After re-examining El Greco's works, he once again became popular.

At the time of his death, El Greco had a working library of 130 volumes.

El Greco conducted a long-term relationship with Jeronima de Las Cuevas. The couple had a son, Jorge Manuel, but they never married.