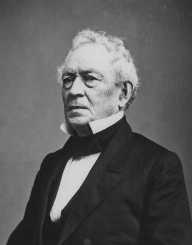 American politician Edward Everett was born on the 11 April 1794 in Boston, Massachusetts.

After attending Boston Latin School, he graduated from Harvard University.

Everett worked as a minister in Boston, taught at Harvard University and then studied at the University of Gottingen. Returning to Harvard, he taught the classes before turning to politics.

He spent ten years in the US Congress until 1835 when he was appointed the governor of Massachusetts (1935). He served ten years in the United States Congress before winning election as Governor of Massachusetts in 1835. As governor, he introduced the state Board of Education, the first of its type in the nation. Everett lost office in 1839 and made Minister of Great Britain (1945). He spent four years as President of Harvard University and then became the assistant of the US Secretary of State, Daniel Webster. Everett spent a brief period of Secretary of State before becoming a senator.

Everett was in favor of the Union before the US Civil War, and he ran for vice-president in 1860. In the 1864 election, he backed Lincoln.

As Governor of Massachusetts, he was responsible for the establishment of the first education board in the country.

He married Charlotte Gray Brooks in 1822 and the couple had six children.

Edward Everett died in Boston Massachusetts on the 15 January 1865.