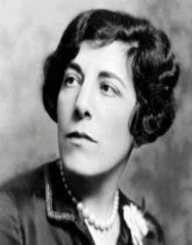 Edna Ferber is an American writer of Jewish origins who has some works that became commercial successes and even adapted into films. She is also a recipient of a Pulitzer Prize and has collaborated with other writers for contemporary works.

She has written two autobiographies the first one entitled A Peculiar Treasure of which the topic revolves around her identity as a Jewish person. The second one was entitled A Kind of Magic, which she talks about her love and longing for America.

Edna Ferber was born in Kalamazoo, Michigan on August 15, 1885, to Julia and Jacob Charles Ferber. Both of her parents are from Jewish descents with her father working as a storekeeper. Growing up, the family moved around a lot and moved to Illinois and Iowa before finally settling in Appleton, Wisconsin.

She finished her studies at Wisconsin where she took an interest in acting and proceeded to enroll at Lawrence University for a short time. She abandoned her dreams of being an actress when her father fell ill and was rapidly losing his sense of sight.

At the age of 17, Edna Ferber let her acting dreams go and started being a member of the working force. As a result of her father's deteriorating health, her mother took over as a storekeeper, and she found employment as a journalist at a local paper in Wisconsin called Appleton Daily Crescent. Afterward, she took a post at Milwaukee Journal. Her tenure with Milwaukee Journal lasted for four years, but she eventually quit due to the stressful and exhausting workload and environment.

Having experienced writing as work, Edna Ferber opted to pursue a writing career. She started working on one of her earliest works entitled The Homely Heroine in 1910 while she took a break from work and was recovering from the stress.

The short story was published in Everybody's Magazine where it was well-received. She followed it up a year later in 1911 with her first novel entitled Dawn O'Hara. Emma McChesney was the lead character of her novel which turned into a series of works.

With her literary career blooming, Edna Ferber soon relocated in 1912 to New York. She received critical acclaim when she published her record-breaking work titled So Big in 1924. The novel itself sold more than 300,000 copies and soon enough granted Ferber a Pulitzer Prize the following year in 1925. So Big was soon after adapted into a silent film and starred by Colleen Moore.

The same year, she produced what is considered her finest work, a novel called Show Boat. It was not only adapted into a film but was also adopted by prominent composer Jerome Kern with Oscar Hammerstein into a critically-acclaimed musical.

Edna Ferber has continuously published other novels that were also adapted into films such as Cimarron, Giant, and Ice Palace. When Giant was put into production, James Dean was cast as one of the lead actors alongside Rock Hudson and Elizabeth Taylor which also became Dean's final film.

Due to her writing skills, Ferber was also granted membership at the Algonquin Round Table, a group of prominent literary figures who regularly met during lunchtime at the Algonquin Hotel located in New York.

Edna Ferber died in the comforts of her home in New York on April 16, 1968, after finally succumbing to stomach cancer at the age of 82. She never married nor had any children, but she took a great deal of effort to care for the career of Janet Fox, her niece. Fox was cast as one of the original actors on two of her plays adapted into Broadway musicals entitled Dinner at Eight and Stage Door.