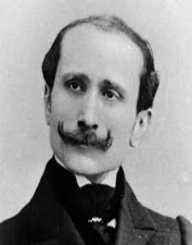 Edmond Rostand was a French playwright and poet.

Edmond Eugene Alexis Rostand was born in the city of Marseille, France, on April 1, 1868. His family was wealthy and prominent. His father, Eugene, was an economist and poet. His uncle, Alexis, was a composer. His aunt, Victoria, was a poet. He attended the College Stanislas in Paris, where he studied philosophy, literature, and history.

Edmond Rostand started his career at the age of 20. He wrote a comedy play, called Le Gant Rouge. It achieved almost no success, with only one performance at the Theatre de Cluny. Two years later, he released a collection of poems called Les Musardises. In 1984, he wrote a play called The Romancers. It was produced at the Theatre Francais.

Decades later, this play was adapted into a successful American musical, called The Fantasticks. In 1895, he created the play La Princesse Lointaine. It was performed on stage in London, but it did not receive great reviews. He then created a Biblical drama, called La Samaritaine.

Edmond Rostand's big success came in 1897. He released a play called Cyrano de Bergerac. It revolved around a noble soldier from the 17th century. It was performed on stage hundreds of times. It was translated and published in the United Kingdom, Germany, Russia, and many other countries. It was adapted into a Hollywood film in 1950 and a French movie in 1990. In 1900, he wrote L’Aiglon, a play revolving around Napoleon’s son. In 1910, he published the satirical play Chantecler. All of the characters in it were farm animals.

Rostand became a part of the Academie Francaise in 1901. He was the institution’s youngest ever member. Throughout the years, he won several literary contests with his writing.

In 1890, Edmond Rostand married Rosemonde Etienette Gerrard. She was a playwright and poet herself. Their first son, Maurice, became an author. Their second son, Jean, became a biologist and philosopher.

Edmond Rostand spent many years at his villa in the French countryside. He fought a long battle with pleurisy, a lung disease. He also suffered injuries from his time in the army during World War I. He passed away from the flu pandemic on December 2, 1918. He was buried at the cemetery in Marseille.

In the early 1920s, three of his works were published. They were La Derniere Nuit de Don Juan, Le Vol de la Marseillaise, and Le Cantique de L’Aile. His wife released a memoir about him in 1935. There were two plays that he never managed to finish – Les Petites Manies and Yorick. His villa is now a museum and a heritage site.