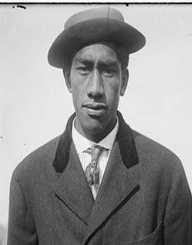 Duke Kahanamoku was a Hawaiian native who popularized the sport of surfing in America back in the day. He was a representative of the US Olympic team and won multiple gold medals for the team. Kahanamoku married Nadine Alexander in 1940 who went alongside him during his travels. He died at the age of 77 in Honolulu, Hawaii on January 22, 1968.

Duke Kahanamoku was born on August 24, 1890, as Duke Paoa Kahinu Mokoe Hulikohola Kahanamoku in Honolulu, Hawaii. He is a descendant of Hawaiian royalty with his parents both coming from the lineage of the lower-ranking nobles who served the royalty. He had three sisters and five brothers and grew up surrounded by 31 other cousins in Waikiki. As a boy, he was very fond of the beach where he honed his swimming and surfing skills.


Popularizing Surfing One Country at a Time

Duke Kahanamoku traveled across the globe to perform swimming exhibitions and introduced surfing to the locals wherever he went. He made annual exhibitions at Sydney's Freshwater Beach starting from December 24, 1914 and became a key event for the sport. Another way he found that helped popularized surfing is by taking on acting roles which connected him to various people further expanding the knowledge of the sport.

Duke Kahanamoku earned a spot in the US Olympic Team as one of its representatives in the 1912 Summer Olympics held in Stockholm. He bagged his first gold medal in the 100-meter freestyle event and a silver medal at the men's 4x200-meter relay. The next Olympic Event e participated on was in 1920 held in Antwerp where he became the gold medallist for the 100-meter relay and the men's relay. His last participation as an Olympic athlete is during the 1924 Olympics held in Paris where he placed second and won the silver medal in the 100-meter men's relay.

Aside from being an athlete, instructor and an occasional actor, Duke Kahanamoku also served as a law enforcement official. He served Honolulu's sheriff for 13 consecutive terms starting from 1932 until 1961. The use of surfboards as means of rescue was also credited to Kahanamoku when an offshore accident happened on June 14, 1925, when a heavy surf capsized a fishing vessel. He managed to rescue eight men while making a quick trip back and forth to the shore.

Duke Kahanamoku is the first person ever to be inducted both in the Surfing Hall of Fame and the Swimming Hall of Fame. He also has a statue built in South Water Wales' Northern headland of Freshwater Beach in Australia where he conducted his swimming exhibitions. There are also statues built in other places in his commemoration such as the one in his burial site at Waikiki issued by the City of Honolulu and unveiled in 1990. The statue was made of bronze and stood 9 feet tall by artist Jan Gordon Fisher.

New Zealand also unveiled a replica of Kahanamoku's surfboard on February 28, 2015, to commemorate the 100th anniversary of his visit to New Brighton.