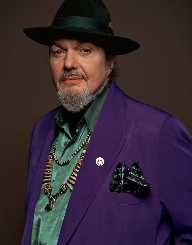 Malcolm John Rebennack was born in the city of New Orleans, Louisiana, on November 21, 1941. His mother was a former model and his father was the owner of a music store. Many of the members of his family were involved with music. He had connections with many famous musicians from New Orleans. He dropped out of Jesuit High School at the age of 16.

After dropping out of high school, Rebennack worked as a producer at Ace Records. He was mostly in charge of the rhythm section. He also performed in clubs with different bands, such as Jerry Byrne and the Loafers, and Frankie Ford and the Thunderbirds. He briefly had his own band, called Mac Rebennack and the Skyliners. He usually played the guitar. In 1960, he injured one of his fingers, so he could not play the guitar properly anymore. So, he decided to focus on the piano. He also developed a style similar to his idol, musician Professor Longhair. A while later, he was arrested and charged for selling drugs, so he spent two years in prison in Fort Worth, Texas. He was released in 1965 and he moved to Los Angeles.

Rebennack started working as a session musician. He performed music for the tracks of musicians such as Cher, Frank Zappa, and others. Soon after that, he became a solo artist. He started using the stage name Dr. John, inspired by a Senegalese man from New Orleans. In 1968, he released his first album, called Gris-Gris. It became a great success and it gained a cult following. His music was a mix of rhythm and blues and rock. He often toured around the country. His performances had ritualistic voodoo elements. He released a few more albums with a similar style. After that, he started focusing on a more traditional form of rhythm and blues. In 1972, he released the album Dr. John’s Gumbo, which also became very successful.

Rebennack kept on releasing new music. He collaborated with other artists, such as Bette Midler, Bob Dylan, and many others. He also continued his work as a session musician. He worked with The Rolling Stones, Neil Diamond, and Carly Simon. In 1977, he performed on an episode of the comedy show Saturday Night Live. He also worked on the soundtracks for several films, including Colors, European Vacation, and The Last Waltz. He recorded a few tapes with piano lessons for a school in New Orleans.

Rebennack worked on the soundtracks for the Disney films 101 Dalmatians and The Princess and the Frog. He performed on stage during the Super Bowl and the NBA All-Star Saturday. He appeared on Late Night with Jimmy Fallon with the band The Roots. He also appeared on the show Top Chef as a guest judge. He released many new albums, including Locked Down and City That Care Forgot.

Rebennack has received a total of six Grammy Awards. He was also inducted into the Louisiana Hall of Fame and into the Rock and Roll Hall of Fame.