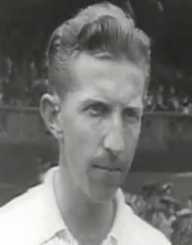 John Donald “Don” Budge was a distinguished American tennis player who won six Grand Slam titles consecutively. He was the first player to complete four Grand Slam titles in a single year in 1938. He was World No. 1 for five years both as an amateur and as a professional player.

Don Budge is known for power tennis and use of backhand. He is one of the tennis greats of all time.

Don Budge was born on June 13, 1915, in Oakland, California. John “Jack” Budge, his father had migrated from Scotland and was interested in playing soccer. The young boy was also genuinely interested in sports and played tennis, basketball, and soccer. As a teenager, he decided to concentrate on playing tennis.

Don Budge studied for some time in the University of California in 1933. He had to leave his educational career as he was selected for the U. S. Davis Cup team at the age of 19.

Don Budge played four times for the United States Davis Cup team from 1935 to 1938. He won 25 out of 29 matches and was instrumental for the U. S triumph in 1937. One of his best performances was his victory over Gottfried von Cramm of Germany in the Davis Cup interzone final. He was the Wimbledon champion in 1937 and again in 1938.

In 1938, he won the Wimbledon men’s doubles title along with Gene Mako, and mixed doubles title with Alice Marble. In 1938, as an amateur tennis player, Don Budge became the first and youngest person in history to win the Grand Slam. In addition to Wimbledon, he overcame John Bromwich in the Australian Open, defeated Roderick Menzel in the French Open and vanquished Gene Mako in the U. S. Open tournaments.

Don Budge joined the professional tennis circuit after his Grand Slam victory. In 1939, he had to contend with dominant tennis players. His winning record over Ellsworth Vines was 22-17 while over Fred Perry it was 28-8. In 1939, Don won two professional tournaments. He defeated Vines in the French Pro Championships and Hans Nusslein in the Wembley Pro tournament. He was the winner of the United States Pro Championship. His winning streak continued in 1941 and 1942 also.

In 1942, he was drafted for the World War service, and he had to serve in the United States Air Force. In 1943, he injured himself with a muscle tear during an army exercise, but he did not give up the army service. In 1945, he was granted medical leave and given medical assistance by the osteopath, Dr. J. LeRoy. The muscle injury handicapped him permanently, and his playing abilities were restricted.

Don Budge entertained the troops in 1945 by playing exhibition matches modelled on the Davis Cup format. He along with Frank Parker represented the U. S. Army while Riggs and Wayne Sabin represented the U. S. Navy team. In 1946, Riggs defeated Don Budge in the U.S. professional tour. Riggs became World No. 1 in 1946 and 1947 when he defeated Don in five sets in the U. S. Pro final in 1947.

Budge was defeated by Riggs again in U. S. Pro finals in 1949. Don Budge retired from professional tennis in the 1950s and focussed on coaching young children. He was also busy talking about tennis in seminars and advertising sports goods. He along with Frank Sedgman won the Veteran’s doubles title in the Wimbledon championships of 1973.

In 1937 and 1938, Don Budge bagged the award of Associated Press Male Athlete of the Year. In 1937, he was honoured with the James E. Sullivan Award for top Amateur athlete of America. He was the first tennis player to get this award. In 1964, he was honoured by induction into the International Tennis Hall of Fame, situated at Newport, Rhode Island.

In 1941, Don Budge married Diedre Conselman, and they were gifted with two sons, David Bruce and Jeffrey Donald. The marriage ended in separation. In 1967, he married Loriel McPherson.

In December 1999, Don Budge was seriously injured in an accident. This finally resulted in his death on January 26, 2000, in Scranton, Pennsylvania.