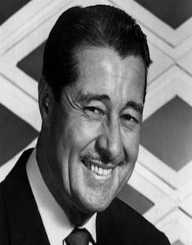 Dominic Felix Amici was born 31st May 1908, to Felice and Barbara Amici. He was born in Kenosha, Wisconsin, in the United States. His father was a bartender while his mother looked after the family. Ameche had three brothers and four sisters.

He studied at Marquette University, Loras College, and the University of Wisconsin.

Although  Don Ameche initially was going to study law, he decided to pursue a stage career instead. He enjoyed the dramatic arts at university, and he stood in when the lead actor didn’t turn up for a local company production.

Don Ameche won a juvenile lead in the production of Jerry for Short which played in New York and then toured in vaudeville with Texas Guinan. His movie debut was in 1935 when he appeared in Dante’s Inferno, but didn’t receive a credit for his role. The movie was produced by Fox Corporation, who then became 20th Century Fox. They signed Ameche to a long-term contract.

It wasn’t long before Ameche was playing lead roles in the mid to late 1930s. He was in movies such as Ramona (1936), Fifty Roads to Town (1937), and In Old Chicago (1938). During his time with 20th Century Fox, up until 1945, Ameche appeared in approximately 36 movies. He continued afterwards, acting in both films and television, and was in over 30 films and several television programs. His movies included the highly successful Trading Places (1983) and Cocoon (1985).

Ameche was in many television shows, including popular shows like The Love Boat, Columbo, Quincy M.E., and The Golden Girls.

Among his awards and honors, Don Ameche was awarded a star on the Hollywood Walk of Fame in 1960. He also won an Academy Award in 1985.

In 1932, Ameche married Honore Prendergast. The couple had six children, and they were still together in 1986 at the time of Prendergast’s death.

He died on 6th December 1993. Cause of death was prostate cancer. He was living with his son, Don, Jr., at the time.